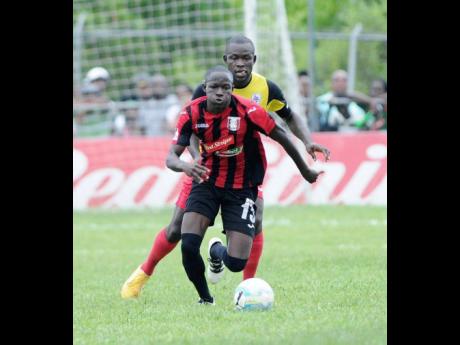 Arnett Gardens' striker Fabian Reid is very confident that he will win this year's Golden Boot award for the leading scorer in the Red Stripe Premier League competition.

Reid, who finished runner-up to Craig Foster last season with 16 goals, is currently tied at the top of the scoring chart with 11 goals with Waterhouse's Tremaine Stewart.

They are closely followed by Tivoli Gardens' Colorado Murray with 10, while Javon East from Portmore United and Nicholas Hamilton of Cavalier are on nine each.

Reid told Star Sports that despite the closeness of the contest, he is very determined to come out on top.

"I still can win the Golden Boot because I have four games left in this round, plus you have the quarter-finals and semi-finals and so I am just trying to see if I can score in all these games," said Reid.

"I know that the race is very tight, but I am up for the challenge because this is something that I really want.

"Last year I lose out on it by one goal to Craig Foster and so this year I am determined to get it," said Reid.

The 27-year-old Reid, who is a former Clarendon College standout, added that winning this award would be a major boost for the career.

"What I need to do to win this award is that whenever I get the chances, I just put them away because we are going through a little phase at Arnett, and is like if I don't score then nobody else is going to take up that mantle," Reid said.

"I am just putting in the work at training, and, hopefully, it will pay off at the end of the season," he said.