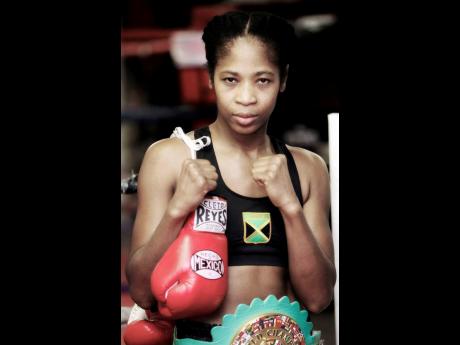 Alicia 'Slick' Ashley, a three-time female World boxing champion, has retired from the ring, after a career that spanned 20 years.

In an interview with STAR Sports yesterday, Ashley said: "I have been retired mentally for several months, but I am now making it official. I had my last fight on March 18 last year in Denmark, and I am telling you now that I am officially retiring from the ring. I love the sport and I will always be involved in it. I will therefore continue in boxing as a trainer, and my goal is to produce a World champion, male or female."

"Although I have lived in New York for a long time, I am still 100 per cent Jamaican. I always box in my Jamaica colours, I love my homeland and the only regret that I have, is that I was not able to fight there. That is the only thing I am really, really sorry about. I just wanted to fight at home and hear the Jamaican fans cheering for me. It was not to be, however,"said the former world champion, sounding at ease with herself.

On her next step, she revealed that she has been training boxers in China for the past several months, and recently inked a one-year contract to train both male and female boxers at the Zou 1 Boxing and Fitness Club in Shanghai. Zou Shiming, one of China's most celebrated boxers, who had to retire early after suffering a facial injury in the ring, and his wife, run the facility. She was recruited on their behalf, and said that she is enjoying her job immensely.

"There is a lot of potential in China and I am hoping to make my mark there" she said. Continuing, she revealed that she trains both female and male boxers and more and more people are getting interested in the sport. The China Boxing Union, which is affiliated to the World Boxing Council (WBC), one of the leading world controlling bodies for the sport, is making an all out effort to popularise boxing, and she feels confident that professional boxing is going to grow fast there.

She noted that the China amateur boxing programme is already growing fast, and predicts that more and more young people will gravitate towards boxing in the near future.

Ashley, who is 51, said that her age was not a factor in her retirement.

"I have been blessed, and because of the way that I fight, I am a mover, hence my nickname Slick, I still have a lot left in me. I have had some injury problems, but the main factor has been the difficulty in getting fights. Opponents have always been reluctant to fight me, hence my having only 37 fights in my career" she pointed out.

Among her accolades, and the one she finds most intriguing, is that she was named the World Oldest Female Boxing Champion at age 48, by Guinness World Records. She also cherishes receipt of the Chairman's Award at the 2014 RJRGLEANER National Sportsman and Sportswoman of the Year Awards ceremony. "That one being home based, means a lot to me" she said.