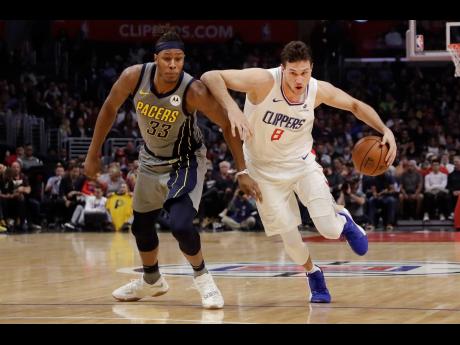 Los Angeles Clippers’ Danilo Gallinari (8) dribbles past Indiana Pacers’ Myles Turner (33) during the first half of an NBA basketball game on Tuesday night.

Off to an 8-1 start in March, the Los Angeles Clippers are rolling towards the play-offs, something critics figured they were giving up on after trading leading scorer Tobias Harris and making other moves in February.

Instead, they're holding on to the eighth and final play-off berth in the Western Conference and are within reach of a higher seed.

Danilo Gallinari scored 24 points, Montrezl Harrell had 20 points and 12 rebounds, and the Clippers beat Indiana 115-109 on Tuesday night, preventing the Pacers from clinching a play-off berth.

"The roster changes definitely helped us in many ways," said rookie Shai Gilgeous-Alexander, who scored on back-to-back layups when the Clippers led by four points with two and a half minutes to go and the shot clock winding down.

"The clock gave me no choice," he said. "I just wanted to be aggressive and make something happen."

Tyreke Evans answered with a lay-up that again drew the Pacers within three.

After a timeout, Bojanc Bogdanovic slipped defending Patrick Beverley, who scored and then made a rolling-dice motion.

Bogdanovic slipped again on the Pacers' final possession, and they failed to score over the final 33 seconds.

Evans and Bogdanovic scored 19 points each for the Pacers, whose road skid extended to seven straight games. Doug McDermott added 17 points, and Domantas Sabonis had 13 points and a career-high-tying 16 rebounds playing the second night of a back-to-back.