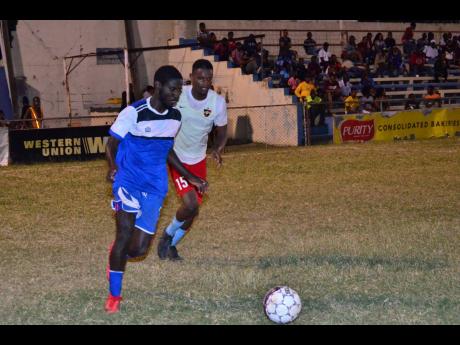 Brown's Town will be looking to ward off Rockfort FC's physical challenge, when they meet in the feature match of the Magnum KSAFA Super League Zone B double-header, at the Constant Spring Complex tonight at 8:30.

In the opening match, group leaders Central Kingston, on 18 points, will play against bottom place Santos FC, which have two points.

A top-four spot is key for all the teams to ensure advancement from the preliminaries into the quarter-finals. Both Central Kingston and Brown's Town, which lies second on 16 points, are assured play-off spots, while Santos and Rockfort are battling for a spot.

Despite the lowly position of some teams, there is not a great deal between the teams in the league as most of the matches that have been decided ended with a one-goal winning margin. In fact, when Rockfort and Brown's Town met in the first round the match ended in a tie.

The latter has maintained good form throughout and their assistant coach, Rohan 'Hooker' Rousseau, expects another very competitive battle from Rockfort.

"The first thing we can see is physically," Rousseau said. "I think there's always an obstacle because the next game will be Rockfort and they have a lot of physical attributes. But we need to get ourselves composed, understanding the game and apply the basic techniques, and I think we can come out on top in that game.

"The last time we played them we had a draw, in which they basically came rushing at us and we weren't composed to execute. But I hope this time we can really put that on the field," he said about their composure.

Part of what makes them strong enough to be among the leading Zone B teams is depth, reflected somewhat by their list of goalscorers, which included main men Dillon McEnnis and Ryan Lewis, along with Ramel Lewis, Kamali Coburn and Chawiries Calder.

Clive Brown, the Rockfort FC coach, has bemoaned that deficiency after witnessing good performances by his team go down the drain with a loss, as they fail to capitalise on goal chances created.

Their last loss was a 2-1 defeat at the hands of Central Kingston last Friday night.

"I think that we just did not defend well in the first part of the game. We allowed Central way too much possession in our third and then, the first goal was a goalkeeping error. At this level, we're supposed to be saving those goals and if we're not going to do that we're always going to lose games like these. And then our old problem came back to haunt us again, we're just not finishing. We created numerous chances but did not finish, both in the first and second halves," admitted Brown.

To correct their scoring issues, Rockfort FC will rest their burdens on the shoulders of attacking players Romario Smickle, Romarie Myers, Geovauni Samuda, Andre Lowe, and in terms of defending, Roshan Rowe.