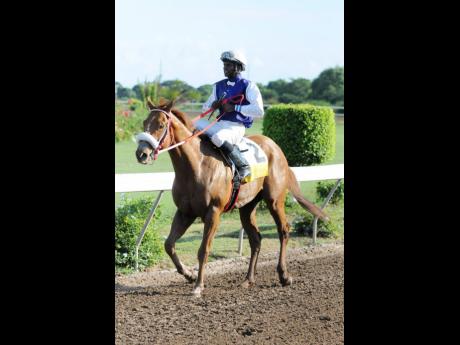 AS innocuous as it might appear, Saturday's third event could be as revealing as last week's Prince Consort Stakes. Never mind SHE'S A MANEATER making her seasonal debut in the sixth with nobody to race but the clock in the Chairman's Trophy, it's her little half-brother, RUN THATCHER RUN, who rivals will be watching to see whether he will be ready for the 2000 Guineas in three weeks' time.

With only two gallops under his girth since resuming training two weeks ago after being pin-fired, and unraced since landing the Jamaica Two-Year-Old Stakes on Boxing Day, the Fearless Vision-Ahwhofah chestnut colt reports with question signs hanging over his head like the sword of Damocles.

Facing nine rivals at six furlongs, including speedsters such as CRUCIAL APPEAL and his own stablemate, United States-bred AMERICAN INVADER, who has looked much better at exercise without the tongue tie, RUN THATCHER RUN, has a three-month catch-up on his plate to cover in one race.

With Nunes having Jamaica Two-Year-Old Stakes runner-up, SUPREME SOUL, on ice after a big seven-furlong victory on January 12, and stablemate TOONA CILIATA outbattling speedy FATHER PATRICK in the Prince Consort, at the same distance and similar time last Saturday, the Guineas bar has been set pretty high for a seemingly rusty RUN THATCHER RUN.

However, trainer Wayne DaCosta is never to be underestimated, especially after lifting RUN THATCHER RUN from virtual obscurity of winning a maiden race on December 1 to upstaging Anthony Nunes' entire two-year-old cohort, three-and-a-half weeks later in the Jamaica Two-Year-Old Stakes.

In addition, his table-turning feat with LADY BLUE in last week's Thornbird Stakes, after her being pummeled by Nunes' CORAZON as a two-year-old, raises the question of whether DaCosta could be playing possum in the weeks leading up to the 2000 Guineas.

AMERICAN INVADER ripped the exercise track in 1:06.3 for five and a half furlongs last Saturday morning, without the tongue tie, an error and a blessing the railbirds claimed, which has led to DaCosta also removing the figure eight this weekend.

That should be a winning workout among a bunch of horses thrown together in a so-called optional $1m claiming event. However, the presence of RUN THATCHER RUN with Omar Walker aboard, opting off AMERICAN INVADER, suggests the most successful jockey-trainer combination in the history of Caymanas Park should be followed until proven wrong.

It is difficult to fathom that DaCosta would risk the champion two-year-old, if he weren't ready, as opposed to getting in some more track time ahead of Guineas Day.