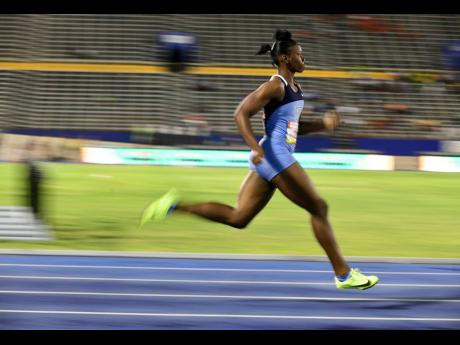 Edwin Allen’s Kevona Davis winning her heat in the Class Two girls 200m on the opening day of the ISSA/GraceKennedy Boys and Girls’ Championships at the National Stadium yesterday.

Edwin Allen High's ace spri nter Kevona Davis made an impressive start to the defence of her Class Two 200 metres title on the opening day of the 2019 ISSA/GraceKennedy Boys and Girls' Championships yesterday.

Davis, the defending champion for the event, won her heat in 23.77 seconds to be the fastest qualifier in the event. Her teammate Bethany Bridge was second best after winning her heat in 24.26, while Excelsior High's Neusha Burgher (24.26) and Kimberly Baker of Holmwood Technical, 24.39, also posted fast times.

St Jago High Kryshell Hoolong, 25.13, was the fastest qualifier in Class Four with favourite Jounee Armstrong (25.27) the second fastest, while Holmwood's Camio White was third best in 25.54. There were few surprises in other events on the opening day. In the Class One boys long jump , defending champion and favourite, Wayne Pinnock of Kingston College, cruised into today's final needing only one attempt to qualify. He leads all qualifiers with 7.62 metres. His teammate, Shaquille Lowe, joined him with 7.29m. Other top qualifiers include St Jago's Kavian Kerr (7.48m), St Elizabeth Technical's Michael Buchanan (7.35m) and Lamar Reid of Calabar High with 6.86m.

Kingston College's Akeem Hanchard, 54.76 metres, led the way in the javelin open for boys with his teammate, Alex Williams also moving on with 50.61m. Calabar's duo of Odayne Harris (54.41m) and Shadae Adamson (52.37) are also through.

St Elizabeth Technical's Sherese Williams is the top thrower among the girls for today's final of the Class Two shot put with a mark of 13.29m. Aaliyah Whyte of Wolmer's Girls with 12.79m, Immaculate Conception High's Safeya Woolcock (12.77m) and Edwin Allen's Monifa Edwards (12.34m) are the other top qualifiers. In the Class Four girls 70m hurdles, Edwin Allen's Santae Wilson, who fell in the first round of the event last year, had no problem this time around. She won the first heat in 10.75 seconds against a negative wind of 3.0 metres per second. She was the fastest semi-final qualifier. St Jago's Jaeda Mitchell (10.81), Habiba Harris of ST Elizabeth, 10.82, St Jago's Moya Edwards (10.96) and St Catherine High's Jerese Allgood (10.97) all went under 11 seconds.

Event favourite Crystal Shaw of The Queen's School led the way among the girls in the Class Three 80m hurdles after clocking 11.36 seconds in a negative wind of 1.6 metres per second. Hydel High's Shantae Myers, 11.46 and St Jago's duo of Danae Nembhard (11.50) and Kay-Lagay Clarke (11.53) were also among the fastest qualifiers.

With the Class Two and One boys moving straight to second-round action only the Class Three were on track in first-round action in the sprint hurdles. Jayd'n Johnson of Jamaica College led all qualifiers after winning his 100m hurdles heat in a quick 13.52 seconds, despite a negative wind of 2.6 metres per second. His teammate, Matthew Sinclair (13.70), joined him along with the Kingston College duo of Amontae Wray (13.61) and Rajohn Gray (13.88) along with St Elizabeth Technical's Alleman Pinto (13.72). There was disappointment in the first heat for the defending champions Calabar as Mickere O'Hara, brother of former Calabar star Michael O'Hara, was disqualified for false starting.

Competition on today's second day will begin at 8:30 a.m. with preliminary-round action in the Class Four girls long jump, Class One girls shot put, and Class One boys discus throw.