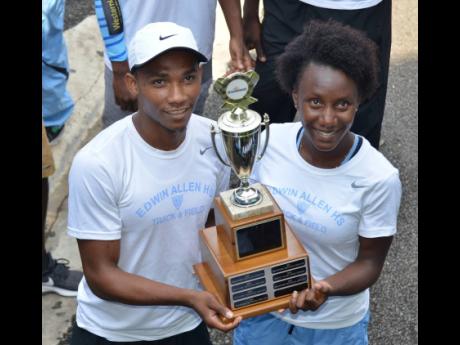 Edwin Allen's Aneisha Ingram, the 2000m steeplechase champion and a fellow student hold the winning trophy after the school's girls championships win at the ISSA/GraceKennedy Boys and Girls' Athletics Championships. This was during celebration activities at Edwin Allen High school in Frankfield, Clarendon yesterday. 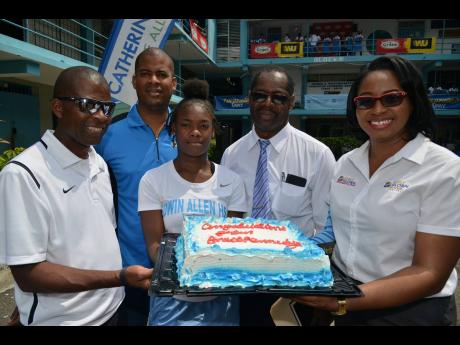 It came as little surprise when Edwin Allen head coach Michael Dyke described last week’s win at the ISSA/GraceKennedy Boys and Girls’ Athletics Championships as his team’s most challenging in their growing dynasty.

The Frankfield, Clarendon-based school was expected to waltz to the title and were close to 100 points in front of their rivals at one point of the championships. However, they were forced into a scrap with Hydel High at the end, eventually winning by a mere seven points to extend their winning run to six straight titles and seven overall.

“This win was the hardest and most challenging one in our seven years of winning”, said Dyke yesterday during the school’s celebrations.

Edwin Allen ended the championships with 291 points to Hydel’s 284, with the Ferry-based school running second for the fourth straight year. Holmwood Technical scored 220, St Jago, 207 and Rusea’s 84, to round up the top-five female teams at the championships.

Dyke stated that last Friday night, after checking the amount of finalists his team had going into the final day, it became clear that they were in for a challenge, as Hydel had 34 finalists compared to his team’s 21.

“We knew it was going to be tough, but we didn’t let that affect the girls, as we had quality people in the finals and we knew what was expected and everybody had to go out there and put in that extra. We knew that once they performed to the best of their abilities, we were confident of pulling it off. Everybody rose to the occasion and did their best,” said Dyke.

Dyke added that his team was more motivated when a statistician on television stated that Hydel would have won by 17 points.

“I didn’t tell the girls what I heard and this really motivated me and I said to my staff, we will not be fazed by that, as we will just have to do what we have to do”, he continued. “On Saturday morning when they made the call for the first five events, we had nobody and we were just there watching in the warm-up track and the first event we had someone in on the day was the 70m hurdle Class Four, where our girl won convincingly and that gave us a big lift,” Dyke shared.

“In Class Three our best jumper Serena Cole, who was the gold medal favourite, got injured,” Dyke noted. “For the first time in her Champs career, Class One athlete Annia Ashley did not do well, the Class Two girls did well but we were disappointed overall with the results here and possibly it was the pressure of Champs, so I didn’t come down too hard on them. We still tried to encourage and motivate them.”