Mullings opens up about loss of coach, surgery recovery - 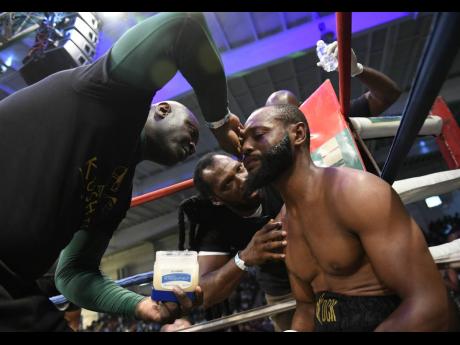 Sakima ‘ Mr Smooth’ Mullings (right) receives instructions from coach Chris Brown (centre) at the end of a round during a boxing match against Alejandro Herrera at the National Indoor Sports Centre, in Kingston, on Wednesday, July 25, 2018. 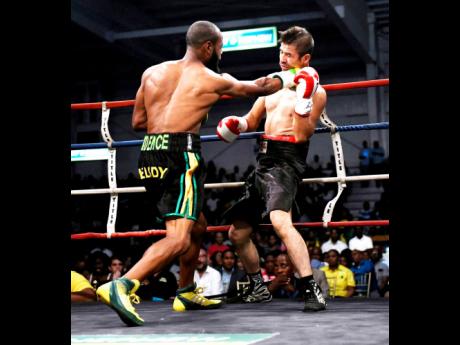 Sakima 'Mr Smooth' Mullings' has endured a difficult 2018, where he learnt he has retinitis pigmentosa (a hereditary condition affecting the retina in his left eye, which also causes sensitivity to light), and also lost his young nephew to cancer.

The former World Boxing Council Caribbean Boxing Federation Welterweight champion sought to get his life and his career back on track earlier this year by doing the surgery required on his eye, but then suffered more misery with the murder of his coach, Christopher Brown in February. Mullings describes Brown, who was buried last weekend, as not only a coach but like a brother of his and said that since his death, it has been a struggle remaining confident through all his trials, like he promised himself he would.

"It's been rough, man," he said. "It's been a rough 12, 13 months for me. With my medical situation, I always had belief that I would be able to overcome my injuries. But then I was shocked again when I lost Chris. It took everything from me, man."As weak as my medical situation looked, and as rough as it was, I always had the mindset that I would eventually be able to overcome it. When the situation with Chris came, it took all my motivation. It was devastating because he was there right through my medical situation, also. He was the one who sent me to Cuba (for treatment). Losing him made everything seem like there was no coming back from it. My whole boxing support system was gone. It was a real depressing time.

"Everybody mourns differently and it would be selfish for me to try to monopolise pain and try to force people to mourn, or feel for somebody the same way I feel for them. Chris was like family for me and my family."

Mullings completed surgery recently and said that he is upbeat about the progress of his recovery as the operation was a smooth and successful one.

"I've been doing all my follow-up visits and everything looks okay and in order," Mullings said. "But it's a long recovery process and I'm just taking it in stride, one day at a time.

"From when I woke up, my family was there waiting for me and I went home immediately. I came back the next day for my first follow-up. I felt a little bit weird with the medication but I wasn't in any pain."

Mullings last competed on Wednesday, July 25, 2018 when he defeated Alejandro Herrera in an undercard bout on the night of the final of the Wray and Nephew Contender Series, a tournament he won twice.