No slip-up this time: Liverpool stay top of league 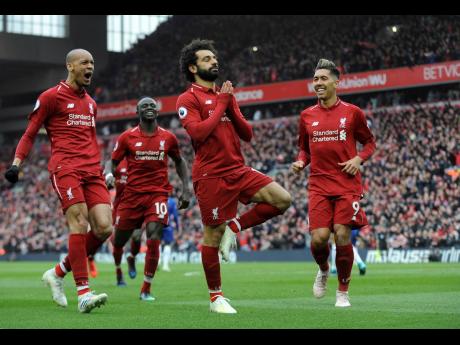 Liverpool’s Mohamed Salah (centre) celebrates with teammates after scoring his side’s second goal during the English Premier League match between Liverpool and Chelsea at Anfield Stadium in Liverpool, yesterday.

Liverpool didn't slip up this time. A 2-0 win over Chelsea -- sealed by a stunning long-range goal by Mohamed Salah -- preserved Liverpool's two-point lead in the Premier League over Manchester City, which beat Crystal Palace 3-1 earlier yesterday.

The victory also meant the Reds partially avenged a memorable 2-0 loss to Chelsea at Anfield near the end of the 2013-14 season that ultimately cost them the title. That defeat was sparked by a slip by Liverpool captain Steven Gerrard that let in Demba Ba to score the first goal, and Chelsea's visiting fans reminded the home supporters about that moment throughout the game yesterday.

"We knew that everything was going to be different today ," Liverpool defender Virgil van Dijk said.

Liverpool's goals came in a 142-second spell at the start of the second half.

Sadio Mane's header put the home team ahead in the 51st, before Salah cut in from the right and arrowed in a 25-yard shot into the far corner.

City, which have a game in hand over Liverpool, had put the pressure on with a dominant display at Selhurst Park against a team that has caused the champions problems in recent meetings.

Raheem Sterling scored twice to put City 2-0 ahead, Luka Milivojevic responded for Palace in the 81st before Gabriel Jesus sealed a ninth straight league win for City with a 90th-minute goal.

City have the harder run-in, with games still to come against Tottenham and Manchester United.