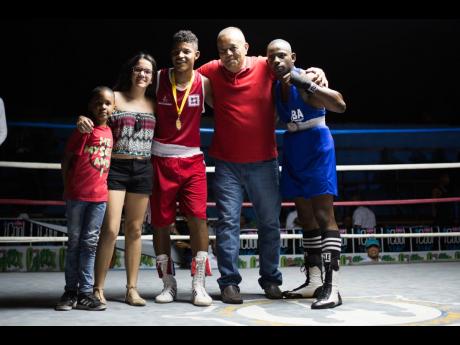 An exuberant group of Panamanians, led by the ambassador to Jamaica, Alexis Sandoval, had a lot to cheer about, and did so last Saturday night at the Stanley Couch Gym on Victoria Avenue in Central Kingston, as their three amateur youth boxers, who were invited to Jamaica to take part in the Jamaica Boxing Board's second Gloves for Guns boxing promotion, overwhelmed their opponents.

Two of the bouts ended with the referee stopping the contest on behalf of the Panamanians, while in the final bout, the Panamanian boxer Alejandro Diaz won by split decision 2-1 over Jamaica's Arnold Anderson. This was the most exciting of the night's seven bouts, and brought down the curtain on a very successful promotion.

The first of the three bouts featuring the visitors, ended very quickly, as Panama's Javier Caseres, who had more experience than his opponent Vinroy Coke, who was fighting for only the second time, went on the attack immediately and his surprised opponent was in trouble quickly. After only 25 seconds, referee Kevin Stiupart stepped in and called a halt, to the delight on the Panamanians and their supporters.

The second bout was for females, and the Panamanian boxer Marcella Martinez won comfortably over Sherikee Moore, who was making her ring debut. This bout was stopped in the third and final round.

The Diaz versus Anderson contest was close and thrilling. These two boxers were evenly matched, and with supporters from both sides cheering wildly, the boxers gave of their best, with Diaz eventually prevailing. The Panamanians were cheered on by supporters from the Dominican Republic, Cuba and Venezuela.

In the four bouts featuring Jamaican boxers, only Leaundre Duncan of the Sugar Olympic Gym defeated his teammate Tajarie Harrison on points. Kevin Brown, also from Sugar Olympic, defeated Tavoy Miller from Fight for Peace on points and Romane Chung of the St Thomas Boxing Club stopped Ajani Douglas from Fight for Peace in the first round. In the other bout, Jermaine Brown from St Thomas defeated Tafari Morris by split decision in a close hard fought bout.