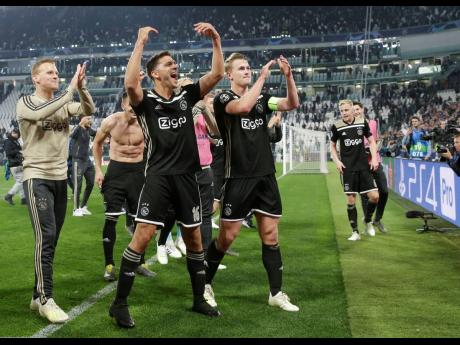 Ajax’s players celebrate at the end of the Champions League, quarter-final, second-leg match between Juventus and Ajax, at the Allianz stadium in Turin, Italy, yesterday.

Ajax eliminated another one of the favourites from the Champions League as they won 2-1 at Juventus yesterday to reach the semi-finals for the first time since 1997 and end Cristiano Ronaldo's hopes of a fourth straight title.

Having already seen off Real Madrid in the previous round, Ajax showed no fear against Ronaldo and the Italian giant either, advancing 3-2 on aggregate after dominating much of the game.

Even going behind to a goal from Ronaldo in the first half didn't faze Ajax's young players as Donny van de Beek levelled shortly after and 19-year-old captain Matthijs de Ligt scored the winner in the second half.

Ajax will play either Manchester City or Tottenham in the semi-finals.

It is the first time since 2010 that Ronaldo failed to reach the last four, having won the competition the last three years in a row with Madrid. His old rival Lionel Messi is very much in contention, though, after scoring two goals to help Barcelona beat Manchester United 3-0 and progress 4-0 on aggregate in Tuesday's other quarter-final.

Juventus signed Ronaldo in the offseason in the hope of ending a 23-year wait for the Champions League.

The 34-year-old Portugal forward scored a hat-trick in the previous round against Atletico Madrid to almost single-handedly overturn a two-goal deficit, and had also found the back of the net in Amsterdam. He added his fifth goal in three Champions League matches in the 28th minute on Tuesday, heading in a Miralem Pjanic corner.

But Ajax levelled six minutes later when Hakim Ziyech's mishit shot turned into an assist for Donny van de Beek, who beat the offside trap to redirect it past Juventus goalkeeper Wojciech Szczesny.

Ajax grew in confidence in the second half and had a number of chances to take the lead, with Szczesny making a couple of stellar saves to keep the game level. But Juventus continued to look vulnerable without captain and key defender Giorgio Chiellini, and Ajax finally found its breakthrough in the 67th as De Ligt outjumped both Daniel Rugani and Alex Sandro to head in a corner.