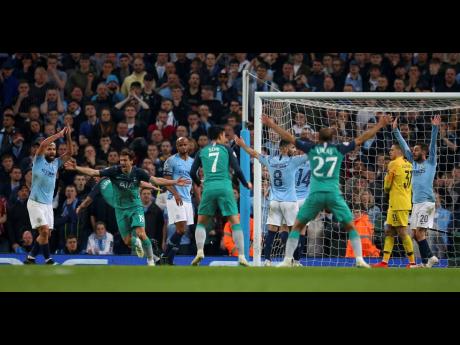 Fernando Llorente sent Tottenham into their first European Cup semi-final in 57 years and ended Manchester City's quadruple hopes by scoring the decider in a breathtaking UEFA Champions League game that produced seven goals and saw an apparent injury-time winner for City ruled out after a video review.

City won the second leg of an instant-classic quarter-final 4-3 at home yesterday, but Tottenham advanced 4-4 on aggregate thanks to the away goals rule to set up a meeting with Ajax.

Llorente, a back-up striker who lives in the shadow of the injured Harry Kane, nudged the ball into the net in the 73rd minute with his hip -- a goal that was only given after a VAR (Video Assistant Referee) review for a possible handball.

Video review worked in Tottenham's favour again in stoppage time when Raheem Sterling looked to have secured City's progress. But as the home fans celebrated and the devastated Spurs players slumped to the turf, the referee determined that Sergio Aguero was offside before crossing to Sterling.

It was a dramatic finish to a game that featured a start unlike anything seen before in the Champions League.

Four goals in the opening 11 minutes. The fifth in the 21st minute, after five shots on target.

The first goal, after four minutes, went to City through Raheem Sterling. Tottenham forward Son Heung-min then netted twice to put City in a position where they had to score three more goals to advance.

"It was a very tough game, a very crazy game," said Son Heung-min, who also picked up a booking that rules him out of the semi-final first leg. "We are very proud of our teammates and I think it's an unbelievable night. Sometimes you are annoyed with VAR but today it is a case of, 'Thank you and good decision.'"