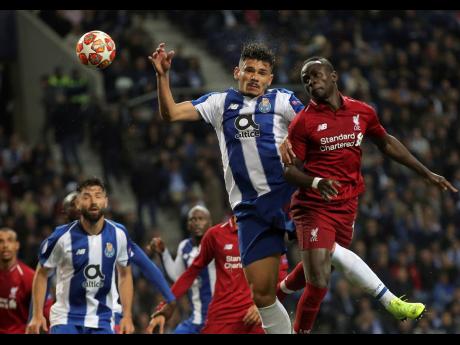 For the second year in a row, Porto had no answer to Liverpool's attacking trio of Sadio Mane, Mohamed Salah and Roberto Firmino.

A year after the forwards scored all goals in a 5-0 rout of the Portuguese champions in the round of 16 of the UEFA Champions League, the trio combined again to lead Liverpool back to the semi-finals of the European tournament.

They netted a goal each in a comfortable 4-1 win over Porto yesterday, with Virgil van Dijk also scoring as Liverpool advanced 6-1 on aggregate after winning the first leg 2-0 at home.

Liverpool, who lost in the final last season, will now face Barcelona, who eliminated Manchester United 4-0 on aggregate on Tuesday. Tottenham advanced on away goals despite a 4-3 loss at Manchester City in the other quarter-final yesterday.

Mane had a hat-trick at the Estadio do Dragao last season, with Salah and Firmino adding a goal each. The Senegalese player led the way again this time, opening the scoring with a 26th-minute goal that was confirmed by video review after being initially disallowed for offside.

Porto had started well and showed signs they might be able to reverse the first-leg deficit, but Liverpool took control after Mane's goal and cruised to victory.

"We knew they wouldn't be able to keep up the pressure of the first 30 minutes," Liverpool coach Jurgen Klopp said. "In the second half, Porto's energy levels dropped, so it was easier for us to control the game."