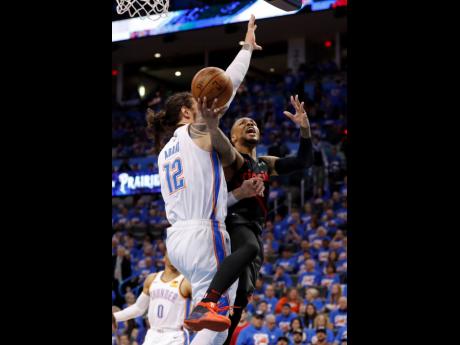 Portland Trail Blazers guard Damian Lillard (0) goes to the basket as Oklahoma City Thunder centre Steven Adams (12) defends in the second half of Game 4 of an NBA basketball first-round playoff series on Sunday.

Now time's almost up for the Oklahoma City Thunder.

Damian Lillard scored 15 of his 24 points in the third quarter, and the Portland Trail Blazers held Westbrook without a basket in the second half in beating the Thunder 111-98 on Sunday night to take a 3-1 lead in their series.

Lillard had another big third quarter after scoring 25 points in the period in a Game 3 loss Friday. In this game, the All-Star point guard was 5 of 7 in the third to help Portland take control for good.

"I didn't feel the need to get overly aggressive in the first half, once I saw how the game was going," he said. "But then in the third, I felt like that was the time when we needed to hit the gas."

Lillard made his first basket with 1:14 left in the first half after missing his first six shots, but he had seven assists before the break.

"We've kind of come to expect it," Portland coach Terry Stotts said. "He manages the game. He senses the moment when we need him to do different things. He's an ultimate competitor. He is going to give it his all."

Portland can close out the series Today at home.

Westbrook scored 14 points on 5-for-21 shooting. He missed his final 10 shots and was 0 for 7 with one point in the second half.

"Sometimes you have nights like that," he said. "That happens sometimes. But it just wasn't good enough for us to get the win."

George missed most of the second quarter with three fouls, but the Thunder hung tough and led for much of the period. Lillard hit a 3-pointer in the final minute to give Portland the lead, then Aminu hit a 3 with 3.9 seconds left as the Trail Blazers took a 50-46 edge into the break.

Lillard hit deep back-to-back 3s 27 seconds apart to give Portland a 66-54 lead. The Trail Blazers stretched the lead to 19 in the third before the Thunder closed the gap. George hit a 3-pointer from the corner in the closing seconds to cut Portland's lead to 79-68.

A 3-pointer by Schroder pulled Oklahoma City within 97-87 with 3:35 remaining, but the Trail Blazers maintained control.

Now, the Thunder will try to fight off elimination.