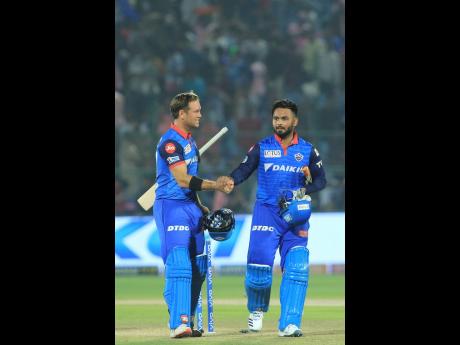 Twenty-year-old West Indies all-rounder, Sherfane Rutherford, played only a small role with the bat, but it was enough to help fire his Delhi Capitals to a six-wicket win over Jofra Archer's Rajasthan Royals, and to the top of the Indian Premier League standings yesterday.

Chasing 192 for victory at the Sawai Mansingh Stadium, Capitals reached their target with four balls to spare, courtesy of left-hander Rishabh Pant's stunning unbeaten 78 from 36 balls.

Left-hander Shikhar Dhan supported with 54 from 27 deliveries while opening partner Prithvi Shaw lashed 42 from 39 balls, the pair posting 72 off 45 balls for the first wicket.

When two wickets fell for five runs in the space of two overs, Pant put on 84 for the third wicket with Shaw.

Rutherford, in only his second match of the campaign, made only 11 from five balls, but it proved crucial at the death. With 30 required from 18 deliveries, the Guyanese left-hander clobbered seamer Dhawal Kulkarni over the ropes at mid-wicket off the second ball and then punched the fifth ball to the cover boundary.

When he holed out in the deep on the off-side off the final delivery, the equation had been reduced to 17 runs from 12 balls.

Archer, who went wicket-less from four overs which cost 31 runs, conceded 11 runs from the penultimate over before Pant finished the game with a six over mid-wicket off left-arm pacer Jaydev Unadkat.

All told, Pant crunched six fours and four sixes to notch his first half-century of the season following a run of poor form.

Earlier, opener Ajinkya Rahane stroked an unbeaten 105 and captain Steve Smith struck exactly 50 as Royals tallied 191 for six off 20 overs, after they were sent in.

They lost Sanju Samson without scoring in the second over with five on the board but Rahane, with 11 fours and three sixes in a 63-ball knock, revived the innings in a 130-run, second wicket stand with Smith.