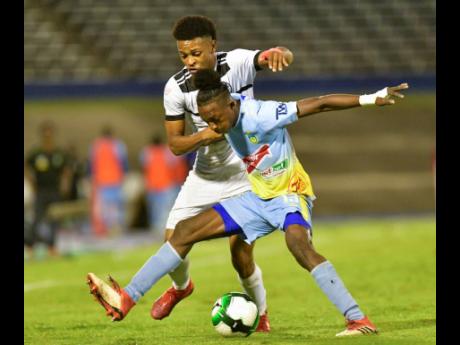 Ricardo Thomas (right) of Waterhouse fights to retain possession against Cavalier’s Alex Marshall in the Red Stripe Premier League semi-final between Waterhouse and Cavalier at the National Stadium in Kingston last Monday.

With less than a week to go before this year's final of the Red Stripe Premier League, Waterhouse's assistant coach, Daniel Bent, said they have been working intensively to improve their tactical awareness.

The match is a repeat of last year's final with Portmore coming out on top 3-2 in a penalty shoot-out also at the National Stadium.

Waterhouse, who last won the title in 2006, are desperate to win, having also lost to Montego Bay United in the 2014 final.

Bent told STAR Sports that his players have been working very hard in training and they are focused on executing their game plan on the day.

"In front of goal, we want to put away our chances, in midfield we want to make the right passes and in defence, we want to be rock solid," he said.

"It is going to take a team effort to win this final and the guys are very much pumped up and very much humbled and ready to go," Bent said.

He added that everybody is in tip-top shape going into Monday's final and so he is expecting a very high-quality final.

"We have continued to solidify what we have been doing all season by telling in training to concentrate on making the right runs in the right channels and switching the point of attack when needed," Bent said.

"Right now everybody is in excellent shape and we are very pleased with how things have been building up for us going into this final," he said.