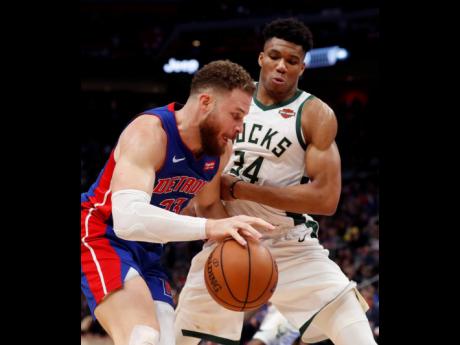 Detroit Pistons forward Blake Griffin is defended by Milwaukee Bucks forward Giannis Antetokounmpo (34) during the second half of Game 4 of a first-round NBA basketball playoff series on Monday.

Giannis Antetokounmpo will have his unique talents on display in the second round of the NBA playoffs for the first time in his six-year career.

If Milwaukee's superstar can match or beat his latest jaw-dropping highlight, everyone is in for a treat unless they play or root for the Boston Celtics.

Antetokounmpo scored a career playoff-high 41 points to lift the Bucks a 127-104 sweep-sealing win over the Detroit Pistons on Monday night.

"This means a lot," he said softly.

The top-seeded Bucks will face fourth-seeded Boston in a postseason rematch. The Celtics are also coming off a sweep, against Indiana, and should have confidence in the match-up after eliminating Milwaukee in the first round last year.

The Bucks swept a seven-game series for the first time since 1983 when they did it in the conference semi-finals against Boston.

"We're going to celebrate it and have fun, but we'll quickly focus on Boston," Milwaukee guard Sterling Brown said. "It's going to be a fun series. Last year, they got us in Game 7."

Milwaukee have come a long way from Antetokounmpo's first postseason appearance four years ago when Chicago advanced with a 120-66 win.

"From where we were and where we are right now, it's been an unbelievable journey," Antetokounmpo said. "The organisation has done a great job of just pushing in another direction."

Antetokounmpo has had a lot to do with that, smashing expectations for the No. 15 pick overall in 2013.

In games and practices, he has impressed his teammates with spectacular plays, and even they were shaking their head in disbelief after his latest highlight.

"It's crazy to be able to witness each one of these, it seems, like each and every game," Bucks centre Brook Lopez said.

The latest one, though, wasn't a play any of his teammates could recall seeing before.

Antetokounmpo leaped in the middle of the lane, trying to dunk on Andre Drummond with his right hand.

He was met by Detroit's 6-foot-11, 279-pound centre in the air and got fouled, getting bumped off his path in the paint.