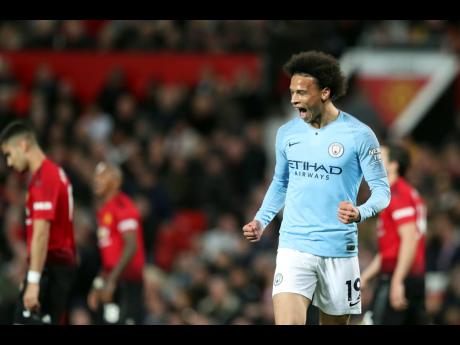 Manchester City kept the destination of the English Premier League title in their own hands by beating Manchester United 2-0 yesterday to climb back above Liverpool with three games left this season.

United slumped to a seventh loss in their last nine matches under Ole Gunnar Solskjaer, thanks to strikes in a 12-minute span from Bernardo Silva and substitute Leroy Sane, with United goalkeeper David De Gea partially at fault for both goals.

Bernardo Silva cut inside and shot inside De Gea's near post in the 54th minute, with the goalkeeper slow to get down to his left.

De Gea then failed to keep out with his legs a low shot from Sane at the end of sweeping counter-attack led by Raheem Sterling.

City moved one point ahead of Liverpool and will become the first team to retain the Premier League title since Manchester United in 2009 if the team wins its last three games -- against Burnley, Leicester and Brighton. Liverpool's last three games are against Huddersfield, Newcastle and Wolverhampton Wanderers.

Pep Guardiola's side cannot reach the milestone of 100 points like last season but continue to break records. Sane's strike meant City has 157 goals in all competitions for the season, beating the English record for a single top-flight campaign that the team held from the pre-Guardiola era in 2013-14.

United was well beaten in the end, like they were in a 4-0 loss at Everton on Sunday, but can at least take solace from Arsenal's 3-1 loss at Wolves yesterday. In the four-team fight for the top-four finish to get into next season's UEFA Champions League, United stayed in sixth place, two points behind Arsenal, three behind Chelsea and six adrift of third-place Tottenham.