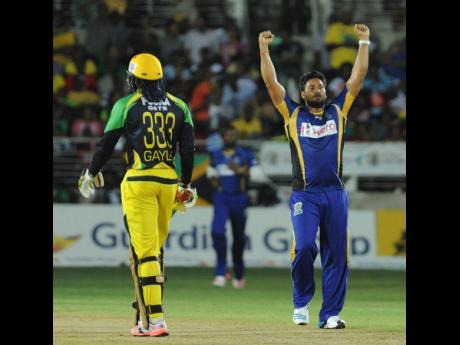 Ravi Rampaul from the Barbados Trident celebrates a dismissal during a Caribbean Premier League T20 cricket match at Sabina Park in 2015.

Speaking at a media conference, CPL Chief Executive Damien O'Donohoe said the league was in the process of wrapping up discussions with the relevant parties and that new owners should be in place before the players' draft, scheduled for May 22 in London.

Mallya is currently fighting extradition from the United Kingdom to his native India, where he is wanted by authorities to face alleged bank fraud and money laundering charges amounting to nearly US$1 billion.

His mounting legal and financial woes have also impacted the franchise, with players yet to be paid in full for the 2018 season which wrapped up last September.

"That's obviously been a big headache for us ... [but] that issue in relation to Barbados will be getting resolved in the next two to three weeks," O'Donohoe said.

"We will also have a change of ownership which we hope to announce in two weeks' time and that's a very experienced owner who is going to come in, and it's something that we're obviously excited about, and we're looking forward to a fresh start at the end of this month."

The 63-year-old Mallya secured ownership of the Tridents in 2016 - the same year he fled India to avoid attempts by authorities to recover millions in unpaid bank loans. He has since been holed up at a mansion in Hertfordshire, east England. Tridents players also suffered non-payment issues following the 2017 season and were only fully remunerated just ahead of the 2018 draft.

In recent months, former Barbados and West Indies batsman Dwayne Smith, a marquee player for Tridents, has been critical of CPL and the franchise over the matter, and called on both entities to speak to the issue.

However, CPL Chief Operating Officer Pete Russell expressed gratitude to all affected players for their professionalism and assured the non-payment of salaries would be resolved shortly.

"We just want to put on record how grateful we are to the patience of the players. They've been very understanding," he said.

"For us, it's just the worst possible scenario where you've got to assess circumstances where an owner, for whatever reason, can't pay players is just not acceptable, really. It's been a process we've had to go through and we're at the end of the process, and it's all positive going forward."

He also noted that systems would be implemented to make sure there was no repeat of the situation.

"And this is, again working with Cricket West Indies, to make sure that in the future, players' salaries are ring-fenced prior to the tournament so we know that money is sitting there, so the players are protected, because we will not experience this again under any circumstances," Russell stressed.

Tridents will hope for improved fortunes under their new ownership. Last season, they finished bottom of the standings, marking the third straight season they missed the play-offs.

The 2019 CPL will now run from September 4 to October 12 in order to accommodate the revised itinerary for India's tour of the Caribbean beginning in August.