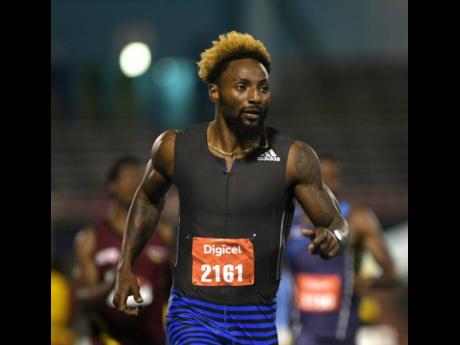 Rasheed Dwyer captured the sprint double at last Saturday's JAAA All Comers track and field meet, which was held at the UWI-Usain Bolt Track as he strolled to victories in the men's 100 and 200 metres.

In the 100m, Michael Bentley of MVP Track Club was second in 10.30 seconds while Ashanie Smith of Racers Track Club was third in 10.33 seconds. In the 200m, it was a clean sweep of the top three spots by Sprintec as Brendon Rodney (20.71) and Chadic Hinds (21.10) seconds ended second and third, respectively.

Former Calabar High standout Michael O'Hara, who has been struggling in the sprint events since leaving high school, turned his attention to the sprint hurdles , an event he once dominated in high school. He finished a close second in the event in 14.11 seconds, as the University of West Indies Odario Phillips won the event in 14.07 seconds, while former Jamaica College's standout Phillip Lemonious finished third in 15.15 seconds.

GC Foster College's Kemario Eldemire continued his dream season in the men's 400m hurdles with another fine display, after stopping the clock at 50.08 seconds to keep his unbeaten tag this season in the event. Ricardo Cunningham, representing Vision Track Club, finished second in 50.50 seconds, while it was a third place finish for Jaheel Hyde of MVP Track Club in 50.57 seconds.

Competing for the first time since her dazzling display at the Penn Relays where she ran a brilliant second leg to put her team in pole position in the girl's 4x100 metres , Edwin Allen High's Kevona Davis suffered misfortune in the women's 100 metres as she was disqualified for false starting. However, teamates Tina and Tia Clayton, who were part of the record breaking relay team in Philadelphia, continued to show good form as they had a 1-2 finish in the girls 100 metres. Tina won in 11.57 seconds, ahead of Tia in 11.61 seconds, with Brandy Hall , who ran the preliminary round of the sprint relay for Edwin Allen at Penns, finishing third in 11.83 seconds.

Fresh off their good runs at the World Relays where they helped Jamaica to a second place and silver in the women's 4x100m relay, the Sprintec pair of Shashalee Forbes 11.40 seconds and Gayon Evans, 11.52 seconds, finished first and second in the women's 100 metres as GC Foster College's Tissanna Hickling finished third in 11.64 seconds.

Petersfield High schoolgirl Ockera Myrie was an impressive winner in the women's 200 metres as she stopped the clock at 23.04 seconds in taking the event, ahead of Anthonique Strachan of MVP Track Club, second, also in 23.04 seconds with Forbes, following her 100m win, coming third in 23.28 seconds.