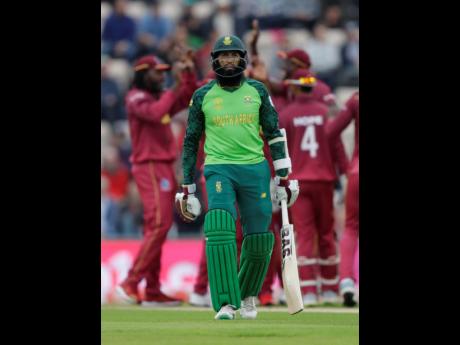 South Africa’s Hashim Amla leaves the pitch after he is caught by West Indies’ Chris Gayle off the bowling of West Indies’ Sheldon Cottrell. 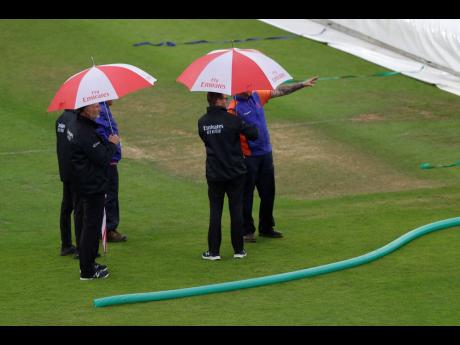 Umpires inspect the pitch after rain stopped play during the ICC World Cup cricket match between South Africa and the West Indies at the Ageas Bowl in Southampton yesterday.
1
2

The Proteas entered the contest on the back of three successive defeats and under heavy pressure of expectations to turn around their failing campaign.

And sent in at the Rose Bowl, they were tottering on 29 for two in the eighth over before rain intervened and eventually forced a no-result.

"We were looking forward to the game, especially the start that we had in the game," Reifer said afterwards.

"And planning for the game last night, we were really looking forward to this game. After they lost the first three games, their confidence as a team will be a bit low, so we wanted to take a big advantage of that.

"Like I said, it's the weather. It's England - [there was a] 90 per cent [chance of] rain today. So there is nothing we can do about it. We just have to take the one point, like I said before, and look forward to the other games."

Not for the first time, West Indies were aggressive early on and were rewarded when left-arm pacer Sheldon Cottrell knocked over veteran Hashim Amla (6) and Aidy Markram (5) cheaply.

The Caribbean side have used their fast bowling attack to good effect in the tournament, blasting out Pakistan in their opening game in Nottingham before also having Australia on the run in their second game last Thursday at the same venue before tasting defeat.

And Reifer said with the current confidence in the camp, there was no opponent the Windies feared.

"When we play them (any team), we want to play the same brand of cricket that we are playing, what we executed in the past couple of games."

The washout saw each team taking a point, leaving West Indies fifth in the standings on three points after three matches.

However, Monday's disappointment also brought sharply into focus the missed opportunity against Australia, when they failed to chase down a moderate 289 for victory.

And Reifer said that while the defeat had been a difficult one to take, he backed the players to learn from the experience.