Spain beat Sweden to stay ahead in Euro 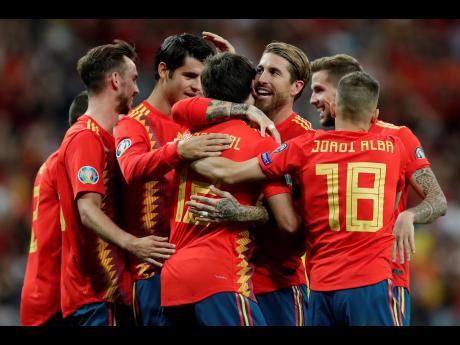 Spain’s Mikel Oyarzabal (centre front) celebrates with teammates after scoring his side’s third goal during the Euro 2020 Group F qualifying match between Spain and Sweden at the Santiago Bernabeu stadium in Madrid yesterday.

Sergio Ramos extended his scoring streak and helped Spain defeat Sweden 3-0 to remain leader of their qualifying group for the 2020 European Championship yesterday.

"It's a great result in a difficult match against a tough opponent," Ramos said. "We've taken an important step toward making it to the European Championship."

Ramos reached 20 goals with the national team, with seven coming since last year's World Cup. He is the national team's top scorer under coach Luis Enrique, who again was absent for personal reasons.

Ramos also opened the scoring in a 4-1 win at the Faeroe Islands last week, when the central defender became the player with the most wins with a national team, surpassing the record of 121 previously held by fellow Spaniard Iker Casillas.

The captain was honoured for the record before the match.

Spain scored another penalty in the 85th after Morata was brought down by Filip Helander inside the area. Ramos handed the ball to Morata, who calmly converted from the spot.

"It was a great attitude by Ramos to let me take the penalty," Morata said. "I hadn't even asked for it."

Oyarzabal closed the scoring with a shot from inside the area in the 87th for his first international goal.