We are not afraid of Archer – Reifer 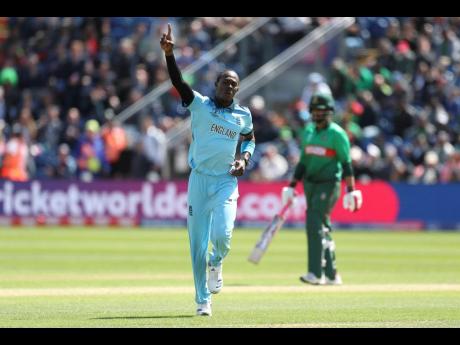 England's Barbadian fast-bowling sensation, Jofra Archer, has already set the ICC World Cup alight with his fearsome pace, but West Indies coach Floyd Reifer said Monday he held no terrors for the Caribbean side as they prepared to face the tournament hosts in the next fixture on Friday.

A last-minute call-up to the England side after playing just three One-Day Internationals (ODIS), Archer topped speeds of 95 miles per hour in the 108-run victory over Bangladesh in Cardiff last Saturday, and he picked up three wickets to move his tally in three matches to six.

In fact, he was recorded as bowling the fastest-ever opening spell by an England bowler in an ODI after averaging nearly 91 mph on a helpful wicket.

Reifer, though, said the West Indies were not rattled by the prospect of facing Archer.

"Yes, he's bowling quickly, but there's nothing that we are not accustomed to. We are looking forward to the challenge, so we will see how it goes on Friday."

The 24-year-old Archer could have easily represented West Indies, but after playing a handful of matches for the Windies Under-19s and then being snubbed for the 2014 Youth World Cup, he turned his attention to representing England.

He was born and raised in Barbados but always held a British passport through his father, who is a UK citizen.

Archer initially faced a wait up until 2022 to turn out for England but saw his dreams fast-tracked earlier this year when the England and Wales Cricket Board reduced the eligibility criteria from seven years to three.