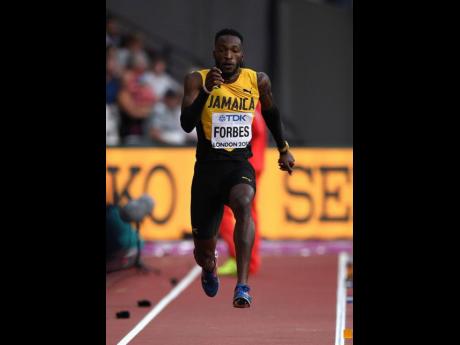 For most of his international career, Damar Forbes has been Jamaica's lone standard bearer in the long jump. Things are changing and Forbes, an Olympic finalist three years ago, couldn't be happier. He tips the long jump to be a big event at the upcoming National Senior Championships.

"I've seen a lot of them at different Trials and like from when they were younger. I see them becoming the persons they are now and it's kind of like heart-warming to see them develop this competitive mode," he said after the Racers Grand Prix last Saturday. "It's heart-warming but then it kind of lights a fire under myself. Now, being able to be healthy and seeing them compete the way they're competing."

The 2013 and 2017 World Championship finalist is particularly pleased to see Gayle's rise. "I remember when Tajay was coming and he was jumping like 7.6 and you could see that he had it but he just wasn't hitting it and then now," he remarked. "It's just like, boom, 8.30 and I'm just like 'wow', we have a next one, cool."

With Gayle's recent surge to 8.30 metres, Forbes stands fourth on the all-time Jamaica performance list with his career best jump of 8.29.

He is optimistic about returning to the World Championships. "I have a different coach and we've working on a lot of different things that will help me moving forward and, you know, so I'm just trying to put it together before Nationals and I feel like I'm in a good spot right now," he said of American Irving 'Boo' Schexnayder, whose past jump students include 2005 world triple jumper winner Walter Davis and 2004 Olympic long jump silver medal winner John Moffitt.

The six-time Jamaica champion thinks the World Championships qualifying standard of 8.17 metres could get battered at the Nationals. "I feel like 8.30 odd might win Trials", he predicted, "and if you see that, then more people might get the standard at Trials so it's going to be nice, it's going be real nice."