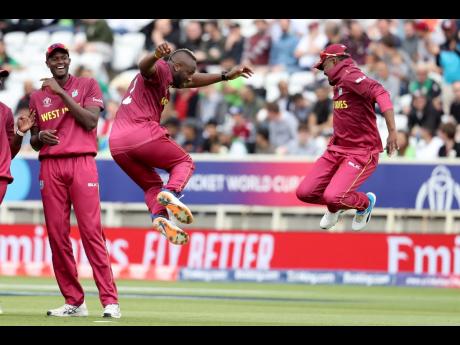 England captain Eoin Morgan yesterday warned his side to be wary of an "explosive" West Indies as the tournament favourites prepared to take on the World Cup outsiders in a fiery clash at the Rose Bowl today.

With memories of the thrilling 2-2 draw in the Caribbean still fresh, Morgan said England were well aware of the Windies' capabilities and would be taking nothing for granted.

"They are a strong outfit. We expect the exact same tomorrow," Morgan told a media conference here.

"They are explosive with the bat and a different challenge with the ball. A lot of their seamers are quite tall and look to hit the wicket, and, obviously, the majority of the time, they only play one spinner, so that is going to be the challenge here."

Based also on the recent series and West Indies' three previous games in the ongoing World Cup, Morgan has taken special note of the Caribbean side's pace attack.

The likes of Oshane Thomas, Sheldon Cottrell, and Andre Russell have all shone in the tournament, bowling aggressively to put West Indies in strong positions even if their batsmen have not always capitalised.

And Morgan said he expects West Indies to once again target England through their battery of fast bowlers.

"It's still the same. Right from the first game that they have played in this tournament, [their fast bowling has been effective]," he said.

"Even when you go back to games that we played in the winter, the big games, the big contributions all had to do with the fast bowlers."

Earlier this year, England felt the weight of the Windies pacers when they were bundled out for an embarrassing 113 in the final ODI in St Lucia as the hosts won to square the series.

Despite that defeat, Morgan said they had learnt several important lessons from that experience.

"Playing on bouncy wickets, our shot selection wasn't great at all," he explained.

"Continuing to get out in the same way as opposed to showing better game awareness and trying to manage that because with the benefit of hindsight, getting some sort of score on the board would have allowed us to stay in the game and possibly win the game because opportunities to score are a little bit more difficult than we had come up against in that series."

He added: "It is not frustration because we learnt a huge amount about growing our game out in the West Indies. The fact that we are not getting carried away about some of the success we have had.

"I think it's important to have days where you are beaten or can't beat a side because you then look even more into areas of improvement as opposed to beating sides convincingly, or even getting over the line showing good character and playing well. You almost look outwardly and say, 'What were we missing today?'"