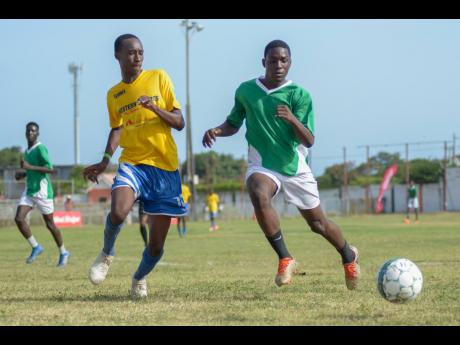 Blain Byam of Santos (left) challenges Romario Campbell of Tivoli Gardens for a loose ball in the Under-17 match yesterday. 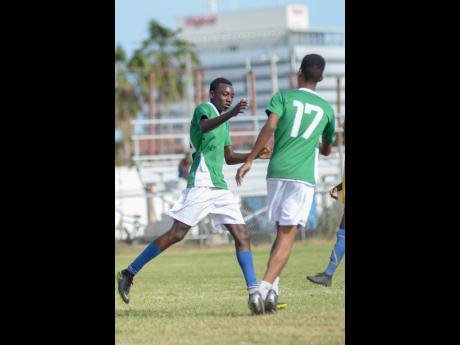 Hundreds of wellwishers gathered at the Edward Seaga Sports Complex in Tivoli Gardens yesterday to recognise the gargantuan contribution former Prime Minister Edward Seaga had made to the community's sporting endeavours.

The event, organised by the Tivoli Gardens Football Club (TGFC), comprised three football matches and the unveiling of a mural to further immortalise the man many refer to as 'Papa Eddie'.

Seaga, who was the president of the Tivoli Gardens FC up until his passing on May 28, is perched on the upper deck of the main stand of the stadium, which bears his name.

Former manager Brian Rose is tipped to become the next club president. The fans hope whoever gets the nod, will have the same passion as Seaga.

Augustos Simpson, the father of Oraine Simpson, a former player, who died tragically some years ago, hopes Seaga's replacement will have the same passion for the club and players.

"Mr Seaga did a lot for sports. Most of the things you see happening, it was him who started it. So this premier league we want to win it for the boss.

"Football, netball, basketball, all the sports he loved, so we want someone to take it up and be as interested in the club and players like him," he stated.

"Since I have been here he has made everyone feel welcome and appreciated. We miss him because he was like a father to us. He loved sports and he wanted the best out of every team and we love him for everything he's done for everybody," he said.

Team physio Rohan Morrison said he loved the football programme and the players.

"He always talked about his boys. The boys are never wrong for him. He loved all the sports but football was his heart," he said.