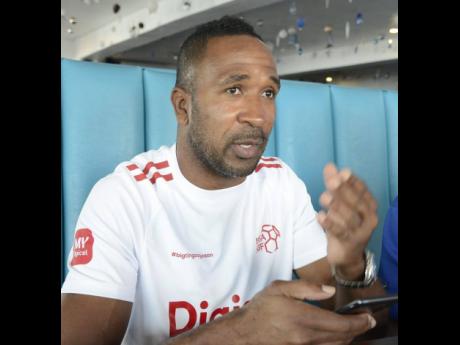 Ricardo 'Whiley Boo' Fuller is well known for his athleticism as a former Reggae Boy and international striker; but for many, his prowess is believed to end on the football field. Fuller explains that this is, however, not the case; like many other Jamaican boys, he also played the lovely game of cricket.

He believes playing different sports throughout childhood is a rite of passage, and he was no exception: "I enjoy and love watching cricket because it was something I was born with, I think, or maybe because I grew up around the sport, among many others," he shared.

The former Stoke City and Crystal Palace star shared that he chose to also play the sport because of his love for athleticism: "My participation was prompted by the love, passion and athleticism for the sport."

Fuller's involvement in cricket goes as far as the beginning of high school and he mastered all possible levels: "I played the sport at every level (Pepsi, Colt and Sunlight) at Camperdown High. Wavell Hinds was my captain at Sunlight level, competing against the likes of Chris Gayle and Marlon Samuels."

While explaining the much-loved game, Fuller highlighted that cricket is a game that any child or adult can learn to play.

He shared that the game is easily understood, but referenced the phrase 'One run short' as possibly one of the hardest cricket terms to explain: "I can't remember the signal for that, because it has been a very long time since I have seen the signal or heard that term," he lamented.

The international footballer, however, made an attempt to explain the term: "It's when batsmen running between stumps/wickets and do not ground the bat across the white line, at each wicket. This is before the player goes back the other direction, in order to increase runs."

Throughout his illustrious international football career, Ricardo Fuller has played alongside and against numerous legends of the game; and for his early years playing cricket, he also listed noteworthy names.

"I have played with or against the likes of Wavell Hinds, Chris Gayle, Marlon Samuels, Gareth Breese, Tamar Lambert and Xavier Marshall, among countless others," Fuller shared.

Ricardo Fuller is one of the most storied Jamaican athletes in history, as the striker started out as a Tivoli Gardens Football Club standout, to eventually plying his trade in both the Scottish and English Premier Leagues during his peak. After taking a two-year break from professional football, the Jamaican sportsman is now a striker for United Kingdom-based Nantwich Town FC, but never misses the opportunity to catch up on a T20 match or the current ICC Cricket World Cup.