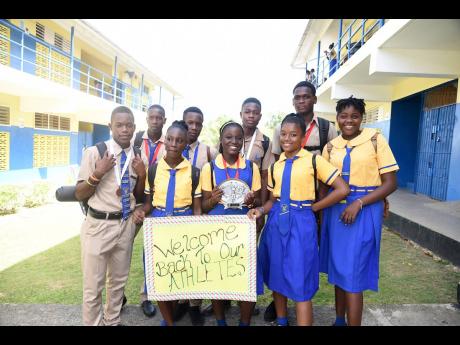 Aberdeen High School celebrated the return of its track and field team from Miami Classic last Wednesday. The team of nine students, teachers and parents got a warm reception when they returned to the school.

Nelissa Ashley-Brooks, the school’s acting principal, in her message, showered praises on the students, while reminding them of their reason at school.

Vernez Nelson, fourth-place finisher at the ISSA Boys and Girls’ Champs in the Class 4 girls’ 70m hurdles, won the first Annual Jesse Holt Invitational 100m title, in 13.60s. Vernez, in her first ever 100m hurdles event, also pocketed silver in the 13-14 girls’ category with a time of 15.46s,

Ismoy Rankine with silver and bronze in the 400m and 800m, along with Jadau Burke, Marlon Carnegie were other medal winners for the school.

“The students got to get involved in a new culture, and the event was well organised,” he said.

“Going there for the first time and capturing seven medals, I think we did pretty well for a new school,” he said, while adding that “it shows that we have many talents at Aberdeen.”

“Already I have students in the school asking if they can join the track team, based on what they saw,” said Ennis.