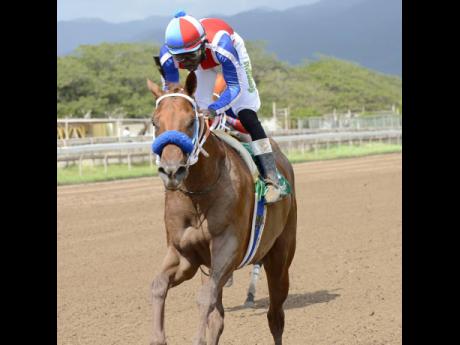 HOW does one make a case against SUPREME SOUL in Saturday's Jamaica Derby? There will always be chatter of 'it's a horse race, anything can happen' or 'he could turn up and decide not to run', pie-in-the-sky arguments by race goers, who can't find a sensible reason to oppose a favourite.

Beaten once in seven starts, losing December's Jamaica Two-Year-Old Stakes by a half-length to RUN THATCHER RUN, SUPREME SOUL went on a five-race win streak, last accounting for the 2000 Guineas and Governor's Cup at a mile and 10 furlongs, respectively.

Sitting level with the field at 126lb in the Guineas, SUPREME SOUL avenged his Jamaica Two-Year-Old defeat, overhauling RUN THATCHER RUN a furlong out to score a two-length victory ahead of stablemate TOONA CILIATA.

Allowing all but PRINCESS ANNIE and EARN YOUR STRIPES 16lb in the Governor's Cup, SUPREME SOUL ran down SENTIENT inside the last half-furlong to win by a half-length with 126lb.

A half of SUPREME SOUL's rivals in the derby - DUKE, SENTIENT, TRICKY ONE and INSPIRED MIRACLE - will now run with 126lb, 16lb heavier than the Governor's Cup, which was two furlongs shorter. From that bunch, the two most likely to last the additional two furlongs are SENTIENT and TRICKY ONE, second and third in the Governor's Cup with 110lb, which says it all about their chances of beating SUPREME SOUL.

The fillies, PRINCESS ANNIE, and PRINCESS AVA, winner and runner-up of the Jamaica Oaks, respectively, took different paths to the derby. PRINCESS ANNIE tested the colts and geldings in the Governor's Cup with 121lb, finishing a decent fifth, whereas PRINCESS AVA was unleashed on non-winners-of-two races, resulting in a nine-length victory at 10 furlongs, carrying 111lb.

Run three weeks apart, the winning times of the Oaks and Governor's Cup, both 10-furlong events, 2:13.2 and 2:08.2, respectively, tells the tale of the tape between the fillies and the colts, though PRINCESS ANNIE can be credited for running an improved race against the boys.

SUPREME SOUL giving up 16lb at 10 furlongs was a mammoth task, more so having to chase down SENTIENT, at 110lb, to win the event. SENTIENT and TRICKY ONE, sitting level at 126lb with SUPREME SOUL, going 12 furlongs, makes the derby a foregone conclusion after getting their chances in the Governor's Cup at 10 furlongs.