Will in charge to defy topweight 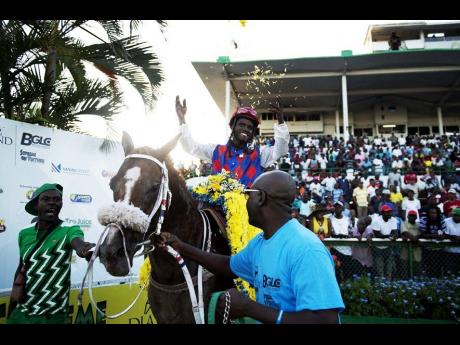 LEFT behind when the pace quickened three furlongs out in last month’s Legal Light Trophy, BIGDADDYKOOL returns seven pounds lighter with that run under his girth, which was his first in five months, hoping to topple topweight WILL IN CHARGE in Sunday’s nine-furlong Viceroy Trophy.

Similarly burdened with topweight 126lb in the May 18 Legal Light Trophy at 10 furlongs, WILL IN CHARGE, for the second time, paid the price of allowing SHE’S A MANEATER five pounds in a route race and again lost by a slim margin, a neck, a carbon copy of their epic battle in last year’s Superstakes, which he lost by a short head.

Finishing four lengths behind in third place, BIGDADDYKOOL ran his usual honest race, returning off a five-month lay-up to face the country’s top two handicappers, who had both already made their seasonal debut and were razor-sharp.

Carrying 117lb, only four shy of SHE’S A MANEATER, who got a five-pound respite for the first time in her last nine starts, and nine lighter than WILL IN CHARGE, BIGDADDYKOOL was left flat-footed when the big two changed gears three furlongs out.

However, he stayed on in the stretch run, an even performance, because neither of his rivals really pulled away from him in the straight.

BIGDADDYKOOL, carrying 110lb for the first time in 29 career starts, returns to the mile chute after December’s Diamond Mile, which he lost by a short head, carrying 119lb, to WILL IN CHARGE, who won with 126, but could have finished two or more lengths clear had Robert Halledeen decided not to showboat.

Though he is at his lightest ever, BIGDADDYKOOL still has a major hurdle to get past WILL IN CHARGE, who will control pace with no real threat to take him out of his game plan. Anthony Nunes has stacked the field with the likes of SOTOMAYOR and HOUDINI’S MAGIC, joined by former stablemate, BRUCE WAYNE, all three running above their respective classes.

HOUDINI’S MAGIC won the event last year, slipping away to create a major upset, flooring SHE’S A MAN EATER, who had stumbled, and WILL IN CHARGE, who ran a stinker, one of those results that happen along once in a blue moon.

Though he loves galloping out of the chute, HOUDINI’S MAGIC has to be on the lead to be effective, as he did when beating suspect open allowance rivals at eight and a half furlongs on June 5. WILL IN CHARGE runs one way, just on or about the lead, which nullifies HOUDINI’S MAGIC but has the potential to set up a very light BIGDADDYKOOL.

WILL IN CHARGE’s preparation, compared with BIGDADDYKOOL’s lone six-furlong gallop, his first since the Legal Light Trophy, gives Robert Pearson’s runner the upper hand despite the handicaps. Heading into In the Legal Light, WILL IN CHARGE was not as extensively drilled and should be jumping out of his skin when the gate opens.