ITF Juniors serves off in Jamaica 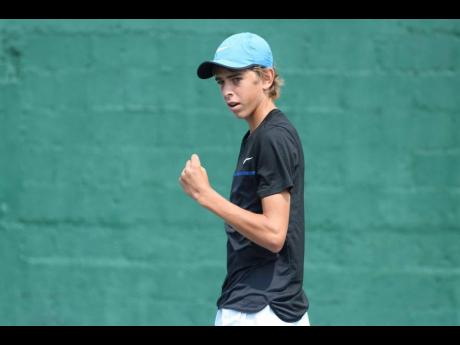 Sixty-four male and female junior tennis players from all over the world started their quest for titles yesterday, at the Eric Bell Tennis Centre on Piccadilly Road in Kingston.

This is an International Tennis Federation tournament, and it is held in Jamaica at this time each year. Thirty-two boys and 32 girls, who are ranked among the top junior tennis players in the world, will be competing for singles and doubles titles and world ranking points, for the next five days. The tournament ends on Saturday and play starts at 9 a.m. each day.

Players from over 20 countries, including Jamaica, have entered the tournament, but the country best represented is the United States of America (USA), which has several players in both the male and female sections. Top seeded among the men is local star Blaise Bicknell, who has been having a good run this year, and is now ranked at number 104 in the world. At the second spot is Alexander Bernard, who is ranked at 200; third is Benjamin Kittay, who is at 224; fourth, Spencer Brachman, 345; and fifth, Jake Krugg, 433.

All these players are from the USA. Two Jamaicans, Nicholas Gore, who is ranked at 1,796 in the world, and Damani Cain, who is at 1,821, are hopeful of winning some matches in the tournament, which would give them valuable points and move them up the ranking ladder.

Among the female players, those ranked in the top five are Americans Ava Krug, 306; Nevena Carton, 474; Ava Catanzarite, 509; Anika Jascova, 588, of Slovakia; and Noa Dujardin, 646, of France. The top female hope for Jamaica is Michaela Stephens, who has been knocking at the door for some time. This is a good opportunity for her to get international competition.

The referee for the tournament is Anthony Jameson and David Sanguinetti is the tournament director. Speaking to STAR Sports on Sunday, Sanguinetti said that he was pleased that there is a full quota of 32 entries in each section, and he was certain that competition throughout the week will be keen.

"We have some quality players entered, and I am sure that there will be some hotly contested matches," Sanguinetti said.