Marquesas for glory on return 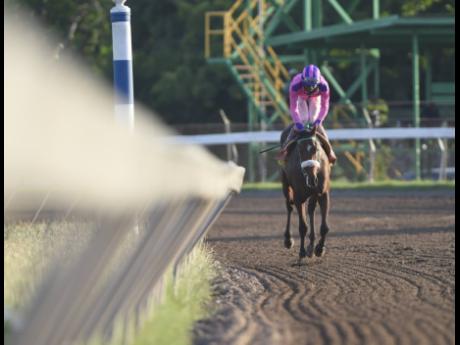 What makes Wednesday's overnight allowance at a mile a head-scratcher for punters is the presence of classic winners from last season FAYROUZ, who has looked sharper at exercise for her third outing off a four-month lay-up, and MARQUESAS, racing for the first time in nine months but doing so well prepared after being last beaten by grade-one campaigner BIGDADDYKOOL.

The usual Wayne DaCosta-Anthony Nunes rivalry accounts for nearly half the line-up, whereas always-lurking Gary Subratie is again looking to spring an upset with either ANNA LISA or UNCLE VINNIE, who upstaged Spencer Chung's MY ELLE BELLE in an 11-1 stunner on June 22.

DaCosta's strategy of stacking the field paid dividend on June 30 in a three-way photo in which, with a little luck, he could have had the first three past the post at 1,000 metres straight, YAYA'S DREAM, DRUMMER BOY and fourth-place DYSFUNCTIONAL, who had to shift lanes late to avoid a collision when closing like a train.

Versatile frontrunners DRUMMER BOY and DYSFUNCTIONAL are back and will be effective at a mile, whereas their main rivals - MY ELLE BELLE, Nunes' DONTAE, BRUCE WAYNE and FAYROUZ, as well as Subratie's UNCLE VINNIE and ANNA LISA - will all have to make their moves from off the pace.

DaCosta's sucker punch could be LOTTERY TICKET, especially after being scratched out of the event in which YAYA'S DREAM had beaten DRUMMER BOY. Though not a miler, the six-year-old mare is a dangerous stalker who can get the trip, especially if she sits in the jet-stream of speedy stablemates DRUMMER BOY and DYSFUNCTIONAL, and gets first run on the slower horses leaving the three-furlong marker.

There are many variables at play, especially United States-bred MY ELLE BELLE, who was in dire need of more urgent handling last time out under apprentice Christopher Mamdeen, swinging into the lane seven lengths behind the leaders.

With a strong early pace expected from DaCosta's speedsters, who will be coming to make all, a mile could suit MY ELLE BELLE and other closers such as DONTAE and FAYROUZ. However, if either Nunes horse can be considered, Michael Marlowe's MARQUESAS must be in the stew.

DONTAE returned off an eight-month lay-up to finish second behind stablemate I AM DI ONE at nine furlongs and 25 yards last month. In his previous race, last October, he was no match for MARQUESAS, who was headed by BIGDADDYKOOL coming off the turn at nine and 25 in the Nigel Nunes Memorial and held second to the end.

Sidelined with an injury, which he had reportedly carried into the race, causing him to miss the Superstakes and Diamond Mile, MARQUESAS has been nursed back to form at exercise by Marlowe, who could prove that a class horse, a champion two-year-old derby runner-up and St Leger winner, doesn't need a warm-up race to prove himself, especially down in class.

Consecutive seven-furlong gallops, followed by a five-and-a-half spin and a three-furlong refresher on Saturday, should have MARQUESAS sharp enough to announce his return with a victory.