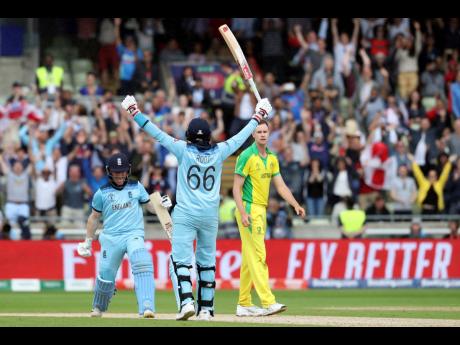 The first flew over long-on. The second went straight down the ground, too, off the very next ball. Jason Roy made it a hat-trick of sixes with the best of the lot, almost sending the white ball out of Edgbaston.

England powered into a first Cricket World Cup final in 27 years -- and did it in some style.

Showing no nerves chasing the biggest prize in the sport, the tournament hosts trounced defending five-time champions and arch-rivals Australia by eight wickets yesterday to ensure there will be a first-time winner of the World Cup.

New Zealand await in the final at Lord's on Sunday.

Roy led the way in a one-sided second semi-final, the opener living up to his billing as the showman of the team by smashing 85 off 65 balls as England hunted down a target of 224 to win in 32.1 overs. An extraordinary knock included five sixes -- three in a row off Steve Smith, sending him out of the attack after one over -- and nine fours.

England captain Eoin Morgan has demanded his team maintain the attacking, ultra-positive outlook it has adopted in soaring to the top of the one-day international rankings over the past World Cup cycle, and his players didn't let him down in what, for some, was the biggest game of their lives.

"We had a bit of a day out," Morgan said. "It's cool when it happens like that."

It was almost the perfect day for England after losing the toss, with Australia soundly beaten in every aspect.

"All in all," Australia captain Aaron Finch said, "We were totally outplayed."