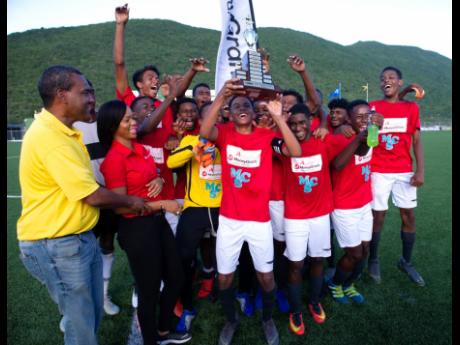 KSAFA president Wayne Shaw and Devonna Coke, senior operations officer at Alliance Investment, present the trophy to members of the Real Mona team after they won the Alliance MoneyGram KSAFA U-17 title.

Goals from Alex Spencer and Raphael Maxwell led Real Mona FC to a 2-0 victory over Cavalier SC in the final of the Alliance MoneyGram Kingston and St Andrew Football Federation (KSAFA) Under-17 Championship at the Horace Burrell Centre of Excellence at UWI Mona on Saturday.

Cavalier will look back on what might have been had they been more clinical in front of goal. They created the majority of the chances in the contest but just could not take advantage of them

Cavalier SC coach Everdean Scarlett lamented the wasteful finishing. "We came to play football. We got a number of chances but we didn't convert [them]. We made two silly mistakes. Real Mona converted and hence the game finished 2-0," said Scarlett.

But he praised the team for the performance of the youthful squad optimistic of the future of the Under-15's that took part. "I'm pleased with the team because these guys are Under-15's and they turned up in an Under-17 Final. Our Under-15 programme is looking great," Scarlett said.

Victorious Real Mona coach Alfred Nelson praised his team's performance. "[I] am very proud. We have been working. For years we have been using the same group playing Under-17's so the reward is good," said Nelson.