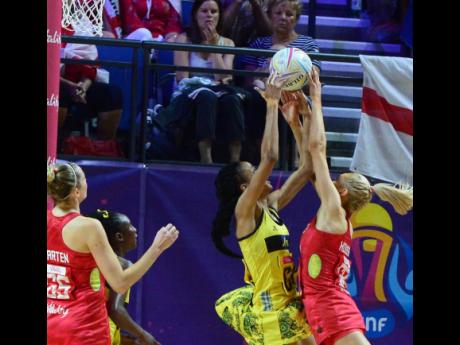 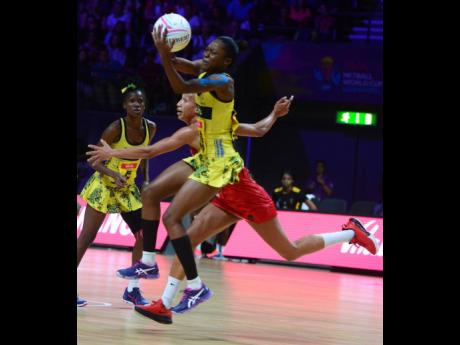 Jamaica’s Shanice Beckford gets to the ball ahead of England’s Serena Guthrie as the Sunshine Girls suffered their second defeat of the 2019 Netball World Cup. 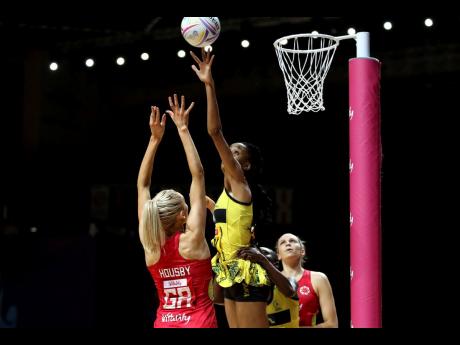 With a spot in the semi-finals of the Vitality Netball World Cup now all but out of their reach, Jamaica's goal shooter Romelda Aiken said the Sunshine Girls are very devastated by their poor performances at the tournament so far.

The Sunshine Girls, who ranked second in the world, suffered their second straight defeat in the tournament yesterday as they were beaten 56-48 by rivals England in their Group G encounter at the M&S Bank Arena here.

The defeat now means that the Sunshine Girls must win their remaining fixtures against Uganda and Scotland, and also hope that South Africa, who defeated them on Sunday, lose their last two games against England and Uganda. The Sunshine Girls are in danger of missing out on the semi-finals for the first time since 1995.

Aiken, who is rated as one of the top shooters in the world, told STAR Sports after yesterday's match that the Sunshine Girls are deeply sorry for the defeat.

"I am very devastated and very sad because I know the work that the girls have been putting in, but it was just small errors that cost us the game," said Aiken.

"I think when we played simple ball game, it worked for us, but it's a bit of nerves and just some silly errors that cost us but games," she said.

Aiken added that despite the position they are in now, the Sunshine Girls will give of their best in their remaining two matches.

"We just have to grind and work hard for the next games because I know how gutted they are right now to be in this position," said Aiken, while adding that this latest setback will not affect the national programme.

"I don't think it will affect us in any way moving forward, because we have a great set of girls working with the Jamaica netball programme and, as you can see, it is just small steps that we are taking," she said.

"I am a hundred per cent sure that it will click, but we just needed a little more game time to plan our game plan coming into the tournament," Aiken said.

Meanwhile, in the midst of the Sunshine Girls defeat yesterday, captain Jhaniele Fowler created history for herself, as she became the first shooter in the history of the competition, recording a perfect shooting percentage of 100 per cent through 60 minutes of play, when she scored 43 goals from 43 attempts.

Goal attack Shanice Beckford, with five goals from nine attempts, was the other scorer for the Jamaicans.