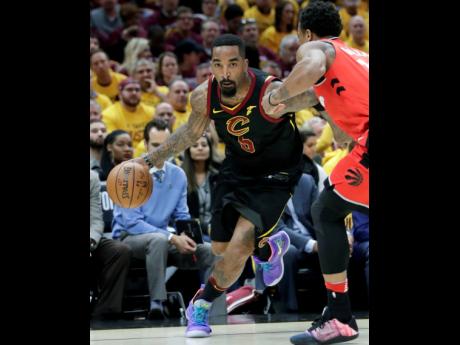 In this May 7, 2018 file photo, Cleveland Cavaliers’ J.R. Smith (left) drives on Toronto Raptors’ DeMar DeRozan in the first half of Game 4 of an NBA basketball second-round play-off series in Cleveland.

CLEVELAND (AP): J.R. Smith's never-a-dull-moment run with the Cavaliers is over.

Cleveland released the colourful shooting guard Monday before his $15.6-million contract for next season became guaranteed. The Cavs had been trying to trade Smith for months, but the team was unable to find the right deal even after he agreed to extend his guarantee date from June 30 to July 15.

By waiving Smith, the Cavaliers will open salary-cap space and will move under the luxury-tax threshold for next season.

The 33-year-old played in just 11 games last season after he stepped away from the team in hopes of being traded or released. It was a mutual decision, because he wasn't happy with his role and the Cavaliers didn't want him to be a negative influence on their young players.

Once he clears waivers, Smith will be a free agent and can sign anywhere. Last week, Smith said he wasn't finished playing and smiled when asked if it's been strange not being part of a team for the past eight months.

"Technically, my whole career's been in limbo, so this is easy for me," he said, before playing in the All-Star Celebrity Softball Game.