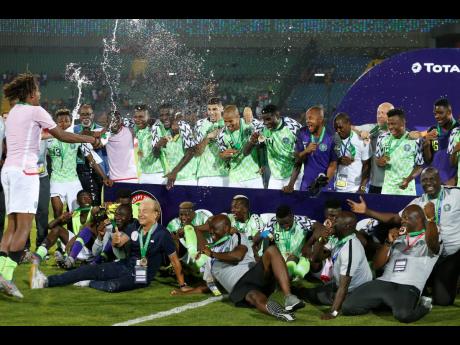 Nigeria beat Tunisia 1-0 in the third-place game at the African Cup of Nations yesterday with an early goal by Odion Ighalo, the tournament's leading scorer.

Ighalo scored from close range in the third minute when he took advantage of a mix-up in the Tunisian defence at Al Salam Stadium to net his fifth goal in Egypt.

Ighalo was substituted before half-time and left the field holding his left leg, an unexpected end to a tournament where he's on course to finish as top scorer.

There are three players who could catch him in the final: Algeria pair Riyad Mahrez and Adam Ounas, and Senegal's Sadio Mane all have three goals.

Algeria and Senegal meet tomorrow at Cairo International Stadium, where Algeria can claim a second title and first since 1990 and Senegal can win the African Cup for the first time.

Ighalo poked home in the opening minutes at Al Salam to take advantage of the confusion in the Tunisian defence.

Tunisia goalkeeper Moez ben Cherifia dived to cut out a cross from Jamilu Collins on the left. The ball came off the keeper's hand, rebounded off defender Yassine Meriah, back on to ben Cherifia, and sat in front of goal for Ighalo to score easily.

Tunisia's best chance came right after half-time when substitute Firas Chaouat was played in by Wahbi Khazri and sliced his shot wide with only the goalkeeper in front of him. Ellyes Skhiri had a header cleared off the line in the closing minutes.

Nigeria also went close in the second half when Samuel Chukwueze whipped a left-foot shot toward the top corner and ben Cherifia dived to claw it away.

In injury time, Nigeria substitute Samuel Kalu had two free kicks saved by ben Cherifia. The first was tipped over and the second scrambled away low down.