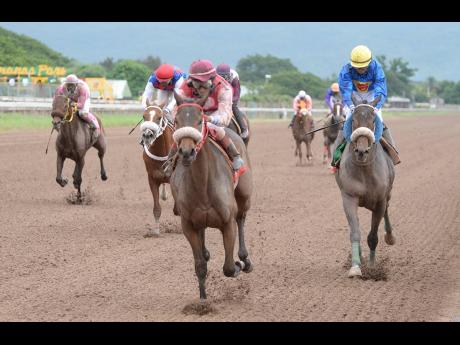 SHE’S A MANEATER (centre), ridden by Anthony Thomas, gallops by BIGDADDYKOOL to win the 39th running of the Burger King Superstakes at Caymanas Park on Saturday, November 11, 2017.

UNDER normal circumstances, SHE'S A MANEATER facing BIGDADDYKOOL at seven and a half furlongs would not even be worth a conversation, not even the 11lb she will give up in Saturday's fifth race should spark a debate. However, the soap opera that the DaCosta-Nunes trainers' championship battle has been, especially last year, there is bound to be railbird talk to the contrary, which, of course, is par for the course at Caymanas Park.

The latest episode (or is it two episodes back?), has to do with DaCosta's namesake, Lewisito DaCosta, who was SHE'S A MANEATER's groom before she set even foot on the exercise track as a two-year-old, right through her Triple Crown, Diamond Mile and back-to-back Superstakes glory - until he got the axe early last month.

Throughout most of her career, starting with her first Superstakes win in 2017, five-year-old SHE'S A MANEATER has been BIGDADDYKOOL's spoiler and a thorn in Nunes' skin, primarily responsible for denying him at least two trainers' championships.

As soon as groom DaCosta got the axe, he might not have even had a chance to collect any salary owed, in came Nunes, grabbing the senior citizen to whom he handed the reins of BIGDADDYKOOL.

That was, indeed, two episodes back because in the latest Caymanas Park Game of Thrones, not one DaCosta-trained horse turned out for the nine-furlong Viceroy Trophy on June 30, which Nunes' BIGDADDYKOOL won with her new groom, Lewisito, chasing and beating stablemate HOUDINI'S MAGIC, who should have carried 110lb but instead toted 119, which is another story in itself.

A gracious racing office, with a handful of grade-one horses in the country, hosted the rescheduled six-furlong None Such Trophy a week later and, predictably, there was no runner from Nunes' camp, resulting in SHE'S A MANEATER racing the clock from a half-mile out.

Therefore, this weekend's episode will be the first meeting of Lewisito DaCosta-groomed BIGDADDYKOOL and SHE'S A MANEATER, which excited railbirds have sworn will be different from previous battles.

However, before BIGDADDYKOOL's fans reach for the popcorn, they should be reminded that in all their meetings, he has only finished ahead of SHE'S A MANEATER twice, when she went to her knees at the start of last year's Viceroy Trophy and when he won the nine-furlong and 25-yard Miracle Man Trophy, which was her twenty-fourth-and-a-half furlong in six and a half weeks, yet she only lost by three-quarter length, allowing him six pounds.