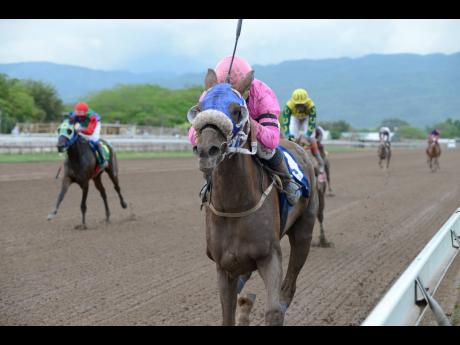 On paper, the St Leger and Triple Crown glory should be a SUPREME SOUL's for the taking, but the beast that horse racing is, there is always a curve ball or two awaiting even the biggest of favourites.

For the hardy horse SUPREME SOUL appears - big, strong, robust and menacing - something just doesn't seem right with his St Leger preparation, especially his last speed gallop on Sunday, a pedestrian 1:17.1 for six furlongs, the fourth-worst of five workouts at the distance that morning.

After all, SUPREME SOUL is being prepared for the Triple Crown, every horseman's dream, yet his last gallop only bettered RIOT WORTHLEY's 1:19.1 on Sunday. His stablemate, PRINCESS AVA clocked 1:15.1, SUPERLUMINAL 1:15.4 and PRINCESS ANNIE, 1:16.4.

In contrast, two of SUPREME SOUL's three other stablemates in the St Leger, EARN YOUR STRIPES and TOONA CILIATA, knotted up in a seven-furlong spin, 1:28.3 and 1:28.4, respectively.

Unless Anthony Nunes figures the St Leger is already in the bag, which has never been his style, SUPREME SOUL, from an exercise watcher's perspective, is ripe for an upset.

At 12 furlongs, the Jamaica Derby, it seemed, would have been a mere formality for SUPREME SOUL. However, sitting level with SENTIENT, who he had allowed 16lb and beaten in the 10-furlong Governor's Cup, SUPREME SOUL drifted out badly in the straight when Shane Ellis applied the left-hand stick and had to be hard ridden to collar his rival in the rematch, even though the weight had swung in his favour, sitting level at 126lb.

Also thrown in the mix is a change of rider aboard SENTIENT, six-time champion jockey, Omar Walker, replacing apprentice Christopher Mamdeen, who, though holding a commanding lead in the jockeys' championship, has only been riding competitively for 10 months.

Being fair to Mamdeen, it's hard to say he had done anything wrong astride SENTIENT in either the Governor's Cup or derby, except that he looked a bit winded at 12 furlongs and tends to grow like a palm the closer he gets to the wire whenever under pressure.

Walker has won almost every big race to be had at Caymanas Park and gets a live mount, SENTIENT, who had turned for home with a two-length lead in the 10-furlong derby and was only run out of it inside the last furlong by SUPREME SOUL, who is bred to stay all day.

However, replacing Mamdeen with Walker is not a magic wand for SENTIENT. Wily Nunes has four other runners in the nine-horse field, two of whom, EARN YOUR STRIPES and TOONA CILIATA, are pacey and will be hell bent on setting up the event for their slower and suspect stablemate.

It should especially be noted that Nunes has removed EARN YOUR STRIPES' blinkers, a sure-fire sign that he wants the Nuclear Wayne-Brown Sugar colt to hang around much longer than he had in the Governor's Cup, which he led for approximately six furlongs with SENTIENT in chase and SUPREME SOUL stalking.

Nunes' choice of rider for EARN YOUR STRIPES, Robert Halledeen, also suggests that the chestnut colt could be his derringer should his cannon fail to fire. On paper, SUPREME SOUL should be the horse but his exercise reports are unflattering, which swings the pendulum to SENTIENT.