Another Vigorous to rebound 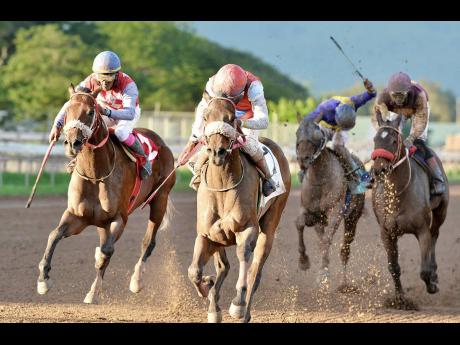 A TRIO of sprinters, all deemed to have underperformed behind 25-1 upsetter, EXHILARATE, two and a half weeks ago at five furlongs straight, makes for an interesting rematch on the round course, going five and a half, for Thursday's Betting, Gaming and Lotteries Commission Trophy.

Exactly three Saturdays past, CHACE THE GREAT seemed the obvious choice at five furlongs straight, drawn better than mid-pack in a small seven-horse field, breaking from stall four with 121lb, down in class with leading rider, apprentice Christopher Mamdeen.

It turned out that after chasing EXHILARATE to the furlong pole, CHACE THE GREAT, the reigning sprint champion, who, in his last start, had outsped SHE'S A MANEATER and WILL IN CHARGE, before being caught at the wire by ANOTHER BULLET in April's six-furlong Lady Geeta Trophy, was left standing by the four-year-old filly.

CHACE THE GREAT, the 1-9 favourite, eventually finished fourth, overhauled by an equally surprisingly outsped PATRIARCH, the winner's stablemate, as well as Saturday's winner, SUPERLUMINAL, running on the faster stands' side.

Another speedster who could not catch up to EXHILARATE was ANOTHER VIGOROUS, the 5-2 second-favourite, who, despite a bad draw at post-position two, was also made to look ordinary by the filly.

It could be argued that neither of the three - CHACE THE GREAT, PATRIARCH or ANOTHER VIGOROUS - are five-straight specialist but it was expected that their class would have trumped EXHILARATE, who surprised even her connections after kicking up rumpus in the saddling barn and had to be taken to her nearby stable to be saddled. This, of course, has opened a can of worms with other trainers asking for same to be extended to their fractious horses.

Anyway, the rematch among CHACE THE GREAT, PATRIARCH and ANOTHER VIGOROUS has one major question hanging. Was it an aversion to five furlongs straight, or underlying factors, that resulted in their poor performances, which allowed even SUPERLUMINAL to look good?

A glance at subsequent exercise reports exonerates one horse, ANOTHER VIGOROUS, giving him the benefit of the doubt re the course. Whereas PATRIARCH and, worst, CHACE THE GREAT, have done very little since, ANOTHER VIGOROUS' 1:07.1 for five and a half furlongs, clocked a week after the race, ties into the fact that he has never been a big fan of five furlongs straight.

Despite trainer Rowan Mathie ignoring all of the useful apprentices, who could have slipped four pounds, or even more, in favour of Shane Ellis at 122lb, anything close to his 58.3 annihilation of HILLY'S HALO and PATRIARCH, at five furlongs round on May 25, should save face for ANOTHER VIGOROUS on the round course.