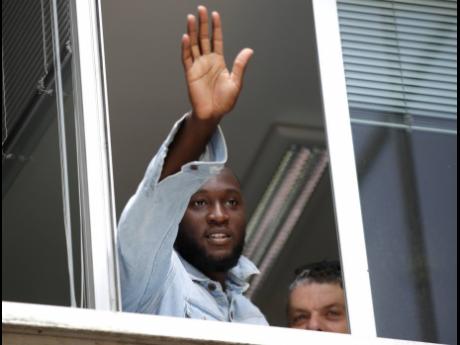 Lukaku put pen to paper on a five-year deal with Inter, joining his younger brother in the Italian league. Jordan Lukaku plays for Serie A rival Lazio.

No financial details were given, but Italian media reported that Inter paid United around EU65 million ($73 million), plus EU13 million ($15 million) in bonuses, for the 26-year-old Lukaku.

"Inter were the only club I wanted, because Inter is 'Not For Everyone.' I'm here to bring the Nerazzurri back to the top," Lukaku said.

"Not For Everyone" is Inter's new marketing slogan.

Lukaku will add some much-needed firepower to a team that managed only 57 league goals last season -- well below the three teams that finished above it in Serie A.

Inter's chief goalscorer, Mauro Icardi, was stripped of the captaincy and dropped from the squad midway through the season.

Attacking midfielder Radja Nainggolan performed way below expectations and has been sent to Cagliari on loan by new coach Antonio Conte, who was in charge at Chelsea from 2016-18.

Excitement is already building for Lukaku, who was greeted by more than 200 fans when he arrived at Milan's Malpensa airport at 2 a.m. Thursday. They chanted his name, and he smiled and high-fived several fans as he walked past.

Lukaku, who has been training this week with former club Anderlecht, scored 42 times in 96 matches for United after joining from Everton in 2017.

However, he failed to find the net in any of his final eight appearances for the club, with his last goals coming in the dramatic 3-1 win at Paris Saint-Germain in early March.

Lukaku is the top goalscorer in the history of the Belgian national team with 48 goals in 81 games. He helped the team to third place at the 2018 World Cup in Russia.

n No financial details were given, but Italian media reported that Inter paid United around EU65 million ($73 million) plus EU13 million ($15 million) in bonuses for the 26-year-old Lukaku.