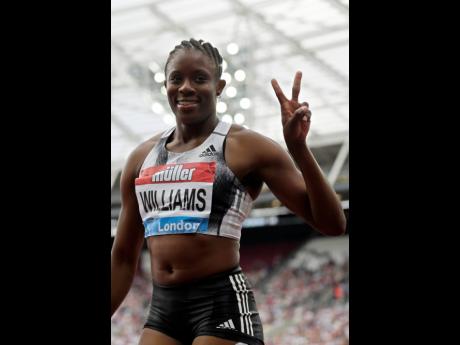 The Jamaica Athletics Administrative Association (JAAA) announced yesterday that national record holder Danielle Williams is eligible to be selected to represent Jamaica in the 100m hurdles at next month's IAAF World Championships.

In late June, the local governing body had ruled that the former World champion would not be eligible for selection after she was adjudged to have false-started in the final of the event at the National Senior Championships in June.

After protesting, Williams left the track and the race. For the second time, the race was sent off and had to be called back. It was eventually cancelled and the hierarchy of the JAAA ruled that the event was null and void.

A statement from the hierarchy of the JAAA said:

"Sprint hurdler Danielle Williams, has been deemed eligible for selection to the Jamaica team to the 2019 IAAF World Championships to be held in Doha, Qatar, next month.

".....The JAAA announced that following international expert advice and a review of the selection policy, the association said that the fairest way to proceed is for the JAAA to make its selection decision based on multiple criteria listed in published policy," the statement said.

After the incident, Williams proved that she was not only the best Jamaican sprint hurdler but one of the best in the world.

She ran a national record and world leading time of 12.32 seconds at the London Diamond League event and also became the front-runner in the Diamond League race, an avenue to athletics' flagship event.

But even a Diamond League win seemed not enough to get the former Queens' School standout in front of the starters in Doha as president of the JAAA, Dr Warren Blake, said that it was up to the association to accept the possible wild-card on her behalf.

But it seems like a loophole in the association's initial stance has caused them to renege on their decision.

"The JAAA also said that the sprint hurdles race at the National Championships had been null and void and Ms Williams' disqualification could, therefore, not stand given that the race never completed and has been declared null and void," the statement said.

It also said that the association will announce the three athletes selected for the event on September 6.