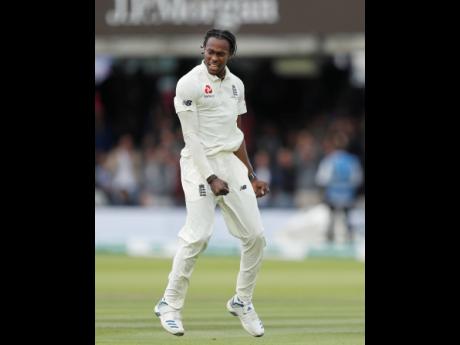 Australia defied the absence of star batsman Steve Smith because of a concussion and more devastating spells of pace bowling by Jofra Archer to hold out for a draw in the second Ashes test against England yesterday.

Set an improbable victory target of 267 off 48 overs at Lord's, the Australians quickly slumped to 47-3 but a fourth-wicket stand of 85 between Marnus Labuschagne (59) and Travis Head (42 not out) helped push them to safety.

Australia lost three more wickets in a five-over stretch to keep the match alive as the light faded, but managed to survive to 154-6 at the end.

Australia retained a 1-0 lead in the five-match series.

Labuschagne had an interesting day. He only found out he'd be playing as Test cricket's first-ever concussion substitute when Smith was withdrawn from the team early Sunday after waking up with a headache and feeling groggy after being hit in the neck by an Archer bumper on Saturday.

Labuschagne came to the middle with Australia struggling on 19-2 after 5.3 overs and, off the second ball he faced, was hit on the grille of his helmet by another vicious delivery from Archer. The batsman dropped to the ground, was checked out by medical staff and required a new helmet.

In a blistering spell by Archer, balls flew past Labuschagne but he survived and looked more comfortable in the final session as England's hopes began to dwindle at the home of cricket. He finally departed, somewhat controversially, when England captain Joe Root was adjudged to have got his fingers under a diving catch at midwicket from Labuschagne's sweep.

It was Labuschagne's second half-century in his sixth Test and he could stay in the team for the third Test starting Thursday on Headingley, with Smith's availability in doubt.

With Australia currently holding a 1-0 lead, the English need to win two of the final three Tests to take it off their fierce rivals.

"I think it was important that we bounced back strongly after (losing the first Test at) Edgbaston and I think we've certainly done that," England captain Joe Root said. "We've proved that we're still in this series and we will take that momentum going into the next game."

Archer's performance at Lord's on his Test debut will give England real hope, though. He was a permanent menace, taking 2-59 off 29 overs in the first innings and then 3-32 off 15 overs in the second.