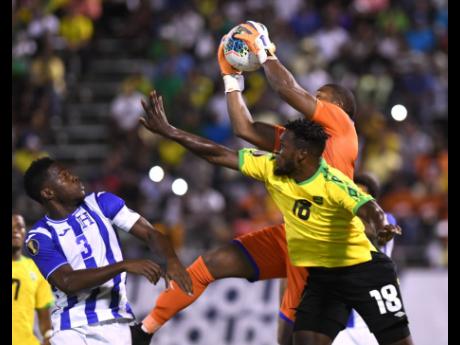 Honduran player Maynor Figueroa looks on while goalkeeper Luis Lopez takes the ball ahead of Jamaica’s Brian Brown in their Concacaf Gold Cup match held at the National Stadium on June 18, 2019.

Jamaican international Brian Brown made an impressive start to his season when he scored a late hat-trick to help his side win the Albanian Super Cup in dramatic fashion.

His goals ensured that his team would begin the season on a winning start.

Brown recently made the move from United Soccer League (USL) outfit Reno 1868 to FK Partizani in the Albanian Superliga and quickly made his intentions clear when he scored a hat-trick coming off the bench to secure the win for his new team.

The Albanian Super Cup is a preseason match played between the winners of the Superliga and the Albanian Cup, where defending league champions Partizani faced off against cup winners FK Kukesi.

Coming off the bench in the 57th minute and with his team under a 2-1 deficit, Brown pulled the game level in the dying moments. Latching on to a cross made into the box, his header was parried away by goalkeeper Ilir Avdyli, only for the loose ball to ricochet into the net of Brown's thigh.

With the teams drawn 2-2 at the end of regular time, the game went into extra time where Brown pulled out the all the stops yet again. He made use of another cross when he rifled a low shot past the near post out of the reach of the diving Avdyli in the 95th minute.

The Jamaican returned for his hat-trick four minutes later when he latched on to yet another delivery into the box, but this time placing the finish across the goalkeeper for a composed shot to the far post to make the score 4-2 in favour for Partizani and to win the Super Cup title.

Brown made his international debut back in the 2013 under coach Winfried Schafer but had a six-year hiatus from international duties before being recalled to the squad in 2019 and was a member of the squad that competed in the recent Gold Cup.