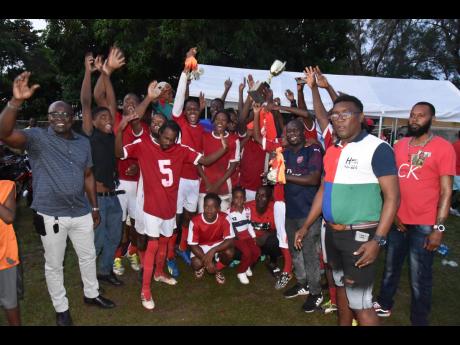 Members of Super Stars FC celebrate after winning the ConserveIT-sponsored Hanover Major League with a 2-1 victory over Esher FC at the Watson Taylor Park in Lucea, on Sunday.

The Moncriffe brothers gave Super Stars their long-awaited first hold on the ConserveIT-sponsored Hanover Major League with a 2-1 victory over Esher FC at the Watson Taylor Park in Lucea, on Sunday.

The Super Stars defence kept Esher at bay despite a series of threatening runs down the left from Kyle Pinnock.

However, in the fourth minute of stoppage time, Pinnock breached the Stars defence to score what only proved to be a consolation goal.

Coach of Super Stars, Orane Kentish, said that after 15 years, the club was hungry for the title and was not going to come to the final to finish second.

“We had a talk before we went out and I told them one goal in the first half and another in the second could get the job done. Our defence line is our strength. Over 11 years, we have constantly been in the semi-finals and this year, the 12th, we were in the finals. We decided that we would not lose this because we don’t want to be known as a team that goes to the final and lose. Once we are in a final we won’t lose,” said Kentish, whose team also secured a spot to next season’s Super League.

Esher coach Jason Fieldis, who was shown a red card at half-time for arguing with the first official, said the weather conditions did not favour his team, but believes the standard of refereeing was even worse.

“I think the weather set us back a bit. However, all being well, I think the Super Stars team was sharper than us, especially around the back, and were more aggressive towards the ball. They got two chances that were defensive errors,” said Fieldis, who was critical of the first official Damion Coombs after having to watch the second half from the sidelines.

“I think a referee who refs with his cards is a poor referee and we saw it today,” he added.