Windies hold India to a draw 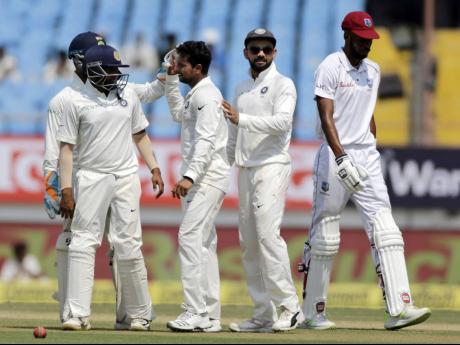 Indian cricketer Kuldeep Yadav (without cap) celebrates after dismissing West Indies’ Roston Chase during the third day of the first cricket Test match between the teams in Rajkot, India, on October 6, 2018.

Hanuma Vihari and Ajinkya Rahane both gathered half-centuries as India's three-day warm-up match against West Indies A petered out into a stalemate here yesterday.

Resuming from their overnight 84 for one at Coolidge Cricket Ground, India declared their second innings on 188 for five with Vihari top-scoring with 64 and Rahane stroking 54.

Off-spinner Akim Fraser eventually accounted for both to finish with two for 43.

Set 305 for victory, West Indies reached 47 for three before the game was called off at the scheduled tea break.

Kavem Hodge, who top-scored with 51 in the first innings, fell cheaply for five after miscuing a pull at pacer Jasprit Bumrah to square leg, while Brandon King's run-a-ball 14 ended when he edged a drive at off-spinner Ravi Ashwin to slip.

And opener Jeremy Solozano's hour-long vigil over 16 ended when he missed a forward defensive stroke to left-arm spinner Ravi Jadeja and was leg before wicket.

Vihari and Rahane had earlier dominated in a second-wicket stand that they stretched to 96 before being separated.

The right-handed Vihari, resuming on 48, reached his half-century off the fourth ball of the morning with an edged boundary off pacer Marquino Mindley.

All told, he faced 125 balls and struck nine fours and a six, while opener Rahane, starting the day on 20, counted five fours and a six off 162 balls in just over three and a half hours.

The match is the only warm-up for India before the opening Test starting Thursday at the Vivian Richards Cricket Ground.