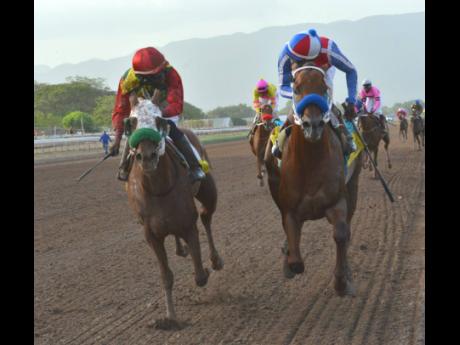 HAVING run his best race yet in the 10-furlong Jamaica St Leger, going down by a short head to stablemate SUPREME SOUL at level weight, TOONA CILIATA returns to the route course, going nine furlongs and 25 yards, but oddly beset with 126lb, whereas his lesser stablemates have been given the benefit of apprentice riders claiming weight.

Pitted against SENTIENT, the Governor's Cup and derby runner-up, races which he missed before coming up big in the St Leger, TOONA CILIATA had nine lengths on his rival in the final classic but was only a half-length ahead of him when finishing second in the Guineas back in April.

It thus begs the question why the connections of TOONA CILIATA have chosen not to have an apprentice aboard the gelding, who, having already won three races, was preordained to carry topweight? The only logical explanation must be that Linton Steadman's handling of the Soul Warrior chestnut has been satisfying and confidence has been placed in him defying the handicaps.

Though it is not at all beyond TOONA CILIATA to win with topweight, the role of his stablemates, BIG BANG and, most important, UNIVERSAL BOSS, will be critical in a rematch, not only with SENTIENT but his rival's United States-bred stablemate, SHE'S AN INTROVERT, who he allows 11lb.

failed by a head

For her third start, SHE'S AN INTROVERT was backed down to 2-5, but amid swirling railbird talk of being a potential non-runner, had the tables turned on her and was outrun by another American, Wayne DaCosta's SUMMER SUN, who had a seven-pound swing to his benefit at eight and a half furlongs.

Heading into that event, SUMMER SUN wasn't considered any big shake but the final time of the event, 1:45.4, following a mile split of 1:38.0, caused heads to turn because DaCosta's runner had finished third behind TOONA CILIATA and SHE'S AN INTROVERT in his previous race.

SUMMER SUN's subsequent run, losing second on the line last Saturday, beaten by FAYROUZ, down in class without the company of her stablemates, suggested that SUMMER SUN has indeed improved and turning the tables on SHE'S AN INTROVERT was no fluke.

Therefore, SHE'S AN INTROVERT, on a line through SUMMER SUN's form, after getting the better of SENTIENT at exercise on Sunday, ought to be a big threat to TOONA CILIATA, running 11lb lighter than the local-bred.

Race tactics, though, could win the day for TOONA CILIATA, who has the help of UNIVERSAL BOSS, and possibly BIG BANG to drag the race at a pace, which could allow the St Leger runner-up to relax and make a move similar to the final classic when he swept from seventh at the half-mile to third at the top of the lane.

Whatever tactics will be employed by TOONA CILIATA and company, it's a risky call with the weight in SHE'S AN INTROVERT's favour, a four-pound swing going a furlong and 25 yards longer on the route. However, Gary Subratie, SHE'S AN INTROVERT's trainer, has done little by way of a clue, his trademark one speed gallop giving nothing away.