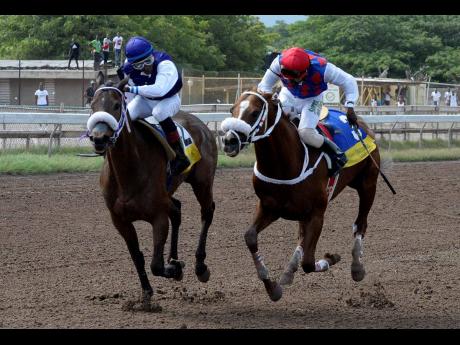 She’s A Maneater (left) with Omar Walker aboard.

SHE'S A MANEATER's run in Saturday's Gold Cup should be a matter of one for the records as she faces a stablemate, HOVER CRAFT, and three rivals, only one of whom, ANOTHER BULLET, can be seriously considered should she have an off-day.

However, off-days are almost non-existent in SHE'S A MANEATER's glittering 27-race career, probably once, a fourth-place finish behind ANOTHER BULLET in April's Lady Geeta Trophy at six furlongs, arguably her worst-ever performance - throwing out when she went to her knees at the start of last year's Viceroy Trophy, the only time she has ever finished worse than fourth.

Sitting on a record of 21 wins, three second-place finishes, a third, one fourth and her Viceroy Trophy debacle, don't expect SHE'S A MANEATER to go after record-holder, NASATOL, who ended his career as a claimer with 35 wins, denied a 36th by a positive test.

However, at five years old, SHE'S A MANEATER ranks with SAINT CECELIA and the great EROS, who retired at six, as being among the most consistent top-class horses of the modern era. In addition to four consecutive, five overall, Caribbean Sprint titles, EROS set four track records, three still existing, including 1:22.4 for seven furlongs, which he ran in the 1994 Gold Cup.

Going for a fifth win from five starts this year, SHE'S A MANEATER should easily tick off victory 22 against old rival ANOTHER BULLET, a hardy seven-year-old with whom she has been butting heads from the age of three, beating him right after winning the Triple Crown, heading into her Diamond Mile victory in 2017.

Sharper than a razor at age five, the times SHE'S A MANEATER clocks at exercise are rarely repeated in the afternoons by the best horses, putting her in a class by herself, which, not even the 16lb ANOTHER BULLET is in receipt of, will make a difference in the outcome of the Gold Cup.

What's left to be seen is whether her trainer, Wayne DaCosta, will campaign her for another year, considering, at age five, she has so far shown no sign of quitting, already equaling EROS' 21 wins from 27 starts, which she is all set to surpass and go beyond with four months remaining in the season.