I Am Di One to outpace speedsters 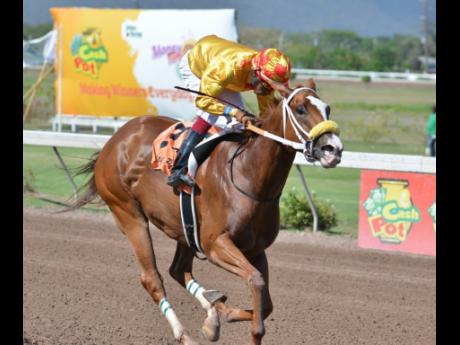 EXHILARATE, a rival for I AM DI ONE in tomorrow’s Saint Cecelia Trophy at Caymanas Park. File

GUINEAS winner I AM DI ONE should be comfortable in Wednesday's Saint Cecelia Trophy, cutting back from three consecutive distance races to middle-distance, six and a half furlongs, facing five rivals, including friendly fire, stablemates EXHILARATE and HOUDINI'S MAGIC.

Having won on her March 23 debut at six furlongs before outclassing LADY BLUE at a mile in the 1000 Guineas, I AM DI ONE gets a sweet spot at six and a half furlongs, a trip not too quick, yet with enough real estate for her to stalk and beat the speedsters.

Giant-slaying six-year-old mare, ZEPHYR, claimed big scalps in her last two wins, both upset victories, and even came close to cutting down PATRIARCH at five furlongs round before those runs. However, ZEPHYR's nagging speed will be nullified by EXHILARATE, who led and ran her off her legs for the entire five furlongs when they met on August 30 behind ANOTHER VIGOROUS.

An improved four-year-old filly, EXHILARATE, carrying 126lb, did well to stay on for second behind ANOTHER VIGOROUS and gets a six-pound pull in the scale, the big weight now slapped on her stablemate, HOUDINI'S MAGIC, whereas I AM DI ONE will come in lightest of the three at 110lb.

Last year's sprint champion, six-year-old gelding, CHACE THE GREAT, spent his time in fourth place, chasing EXHILARATE, ANOTHER VIGOROUS and ZEPHYR on last, and was even passed in the straight by RAS EMMANUEL, whose rider, Omar Walker, eased his mount late, yet still finished third, underlining how badly CHACE THE GREAT has lost form.

Making matters worse for CHACE THE GREAT, even at his best, he really doesn't fancy an inch over six furlongs when pressed, despite him being on the lead well into the stretch run in races such as last year's Diamond Mile.

It's not necessarily a bad draw for I AM DI ONE, coming out of the one hole, a forceful filly, who gives her riders hell to contain her. Anthony Thomas has smooth hands and the help of EXHILARATE to keep CHACE THE GREAT and ZEPHYR busy. Topweight has taken care of HOUDINI'S MAGIC whereas UNCLE FRANK needs to find his company and a longer trip.