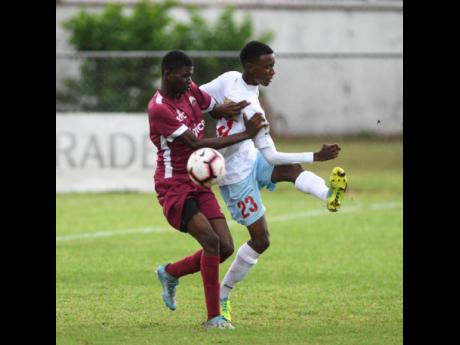 Having the missed out on a spot in the quarter-finals of the ISSA/Digicel Manning Cup by just one point in the last two seasons, Eltham High School assistant coach Demar Howard said they are poised to go much deeper in this year's competition.

The St Catherine-based institution have been drawn in Group F with St George's College, Calabar, Ardenne, Norman Manley, Campion College and Ardenne in this year's competition.

However, despite their opening game 2-0 defeat against St George's College, who are one of the favourites for this year's title, Howard said his players have shown maturity during the match and he is confident that they can advance to the next phase of the competition this season.

"The last two seasons we have missed out on the second round by just one point, but when we assess the opponents that we will have to face this season, I think we can definitely leave this group," Howard said.

"Playing against St George's College in our opening match, I think we can use this game to assess our performance and what we need to do going forward in this competition."

Eltham have retained eight starting players from their squad last season and while admitting that preseason preparations were slow, Howard said that he expects his team to improve as the season progresses.

"We have started out slowly based on the fitness level of our team, so going forward we need to work on that and once we are able to do that, then we will be a force to be reckoned with in the competition," he said. Eltham's only appearance in the second round came in 2006 when they made it to the semi-finals of the competition.

They won the Walker Cup competition in 2006, in their debut season in schoolboy football.

"It is a long tournament, so we have to take it stage by stage because based on how the competition is structured now, anything is possible once we get to the next round," Howard said.